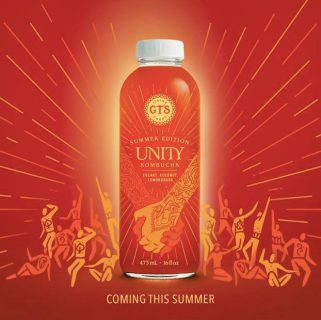 LOS ANGELES — GT’s Living Foods, maker of the original Kombucha and #1 selling brand in the U.S., today announced its new limited edition offering, Unity. The smooth summer flavor, which showcases a harmonious blend of tart cherry, silky sweet coconut, and bright lemongrass, is the latest addition to GT’s Organic & Raw Kombucha lineup. Unity is now available at retailers nationwide through August 31, 2018 with an SRP of $3.99 per bottle.

Known as the first Kombucha on shelf in the U.S., GT’s continues to lead with innovation – this time with Unity. With a simple scan using the camera in the Spotify app search bar, users can access GT’s “Unity” playlist on Spotify. The playlist has more than 30 tracks and is the perfect way to hear fun summer jams, including up-and-coming artist Chris Lee’s debut single, “Make a Move”, featured in the Unity launch video.

“We’re very excited to collaborate with Spotify on this endeavor” said GT Dave, CEO/Founder of GT’s Living Foods. “This interactive touch point strengthens our message of Unity because music is such a powerful force that brings people together, from all walks of life, all around the world.”

While Unity is on shelves, GT’s is also encouraging its community to post a photo on social media with any GT’s Kombucha bottle and #GTsUnity for the chance to win a VIP music festival experience.

“Our world has become so divisive and people are longing for unification,” expressed GT. “We offer this gift of Unity to remind everyone that there is more that brings us together than pulls us apart.”

The spirit of Unity is powerfully illustrated on the front of its collectible bottle which depicts two hands, each representing a unique and diverse community, clasping as a symbol of strength in solidarity.

GT’s Living Foods was founded in 1995 by GT Dave. The company stays true to its roots by continuing to handcraft its signature small batch Kombucha in the same way GT did in his parents’ kitchen more than 23 years ago. The family-owned and operated company has since expanded its offerings beyond Kombucha to include ALIVE, CocoYo, CocoKefir, and VeggieKefir. With a commitment to the integrity of the ingredients, as well as the process, GT’s Living Foods is dedicated to crafting products with living probiotics that are raw, organic, vegan, and gluten free. It is their purpose to help people to live happier, healthier lives. For more information, please visit www.gtslivingfoods.com.