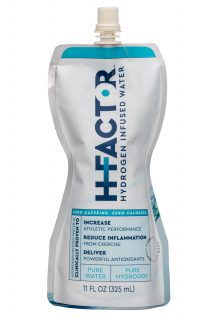 NEW YORK – Innovative and award-winning HFactor hydrogen infused water announced today that its flagship beverage is now available in an additional 98 stores in the mid-Atlantic and New England regions as a result of its activation in Wegmans Food Markets. Wegmans joins an existing and growing family of retailers that includes, among others, Giant, Jewel Osco, Kowalski’s, AKiN’s and Chamberlin’s, HyVee, Bristol Farms, Sprouts, and Gelson’s.

“We are excited to launch HFactor at Wegmans we believe HFactor  will continue to reinforce Wegmen’s commitment of  providing healthier and better food to their communities,” said HFactor Founder & CEO Gail Levy.  Wegmans is the 15th major retailer in the United States to feature the HFactor Hydro-Pack with its hydrogen-protective spout.

Founded in 2014, HFactor® is the first functional water supercharged with the documented benefits of molecular hydrogen – a powerful antioxidant and anti-inflammatory agent.  Created by a team of health and fitness product experts, HFactor® is naturally infused with pure hydrogen to provide refreshing hydration plus therapeutic benefits for fitness, health, wellness and lifestyle recovery. It comes in a carry-anywhere pouch that optimizes the integrity and pureness of its hydrogen content. HFactor® contains only two ingredients, pure water and 99.999% pure hydrogen gas, produced through a pure process with no additional additives. HFactor® water is sourced and packaged in the United States and is available online and in select stores nationwide.  www.hfactorwater.com

Ever since Walter and John Wegman founded Wegmans in 1916 they have lived and managed by the mantra “Helping Families live healthier, beter lives through food. Wegmans Food Markets, Inc. is a 98-store supermarket chain with stores in New York, Pennsylvania, New Jersey, Virginia, Maryland, and Massachusetts. The family-owned company, recognized as an industry leader and innovator, celebrated its 100th anniversary in 2016. Wegmans has been named one of the ‘100 Best Companies to Work For’ by FORTUNE magazine for 21 consecutive years, ranking #2 in 2018. For more information and a location nearest you please visit www.wegmans.com