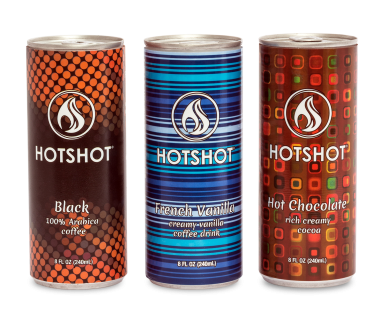 NEW YORK, N.Y. — HOTSHOT, the Shark Tank alum and beverage category disruptor who is redefining grab and go convenience, has signed an agreement with S.K. I. Beverage to bring hot canned coffee to caffeine deprived consumers in the metro New York area.

Located in Brooklyn, with a dedicated sales team of more than 100, S.K.I. Beverage is one of the largest, independent, craft-centric wholesalers in the country.

The agreement will bring HOTSHOT canned coffee to S.K.I.’s more than 12,000 active customers in Manhattan, Queens, Kings, Bronx, Richmond, Westchester, Putnam, Duchess, and Rockland Counties and all of Long Island (Nassau and Suffolk Counties).  Through S.K.I., the brand is currently running a test in Gristedes, a New York City-based chain of supermarkets.

“I first learned about this type of hot, ready-to-drink coffee while in Korea, and it has been a long time coming to the USA,” said Ralph Mauriello, S.K.I. Founder.  “Along with the quality of the product, the HOTSHOT concept will be welcomed in many different venues here in New York.”

The agreement brings another win to the HOTSHOT team, who in the first five months of operation have confirmed opportunities with:

“Few know the Food Service industry in the metro NY area and beyond better than S. K. I., and we are thrilled to join their portfolio,” said Danny Grossfeld, CEO and Founder, HOTSHOT.

Hotshot is the brainchild of Entrepreneur Danny Grossfeld who was first exposed to HOT coffee in a can on a trip Japan, where it is a $15 billion industry.  Intrigued, Grossfeld launched a Kickstarter campaign to bring a version of the Japanese product to U.S. consumers, which caught the eye of Shark Tank producers. While Grossfeld didn’t get an initial deal, the show’s visibility helped secure private investment and generated significant consumer interest.

Initially available in Black, French Vanilla and Hot Chocolate, the coffee (made from 100% Arabica beans) is served in aluminum cans (made of 70% recycled content) that are warmed to 140 degrees — which is the perfect temperature to drink premium coffee— by a custom-designed HotBox. The HotBox uses innovative patented heating technology to keep HOTSHOT at 140 degrees day and night, while being energy efficient.  Additional information is available on Facebook and www.drinkhotshot.com.