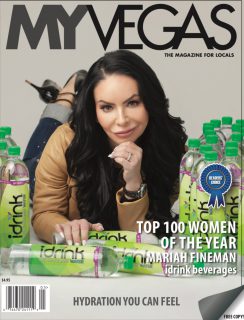 LAS VEGAS — Each year, MYVEGAS Magazine features a list of the top 100 influential women of the year in Las Vegas. Not only was Mariah Fineman–president of Green One Holdings–selected for this year’s list, but she also graces the cover.

Mariah’s story captured the hearts of her community. From her origins as a member of an immigrant family to her achievements as a college graduate and president of a major beverage company, all with English being her third language, Mariah has earned this distinction.

Her extensive involvement within the community–sponsoring numerous youth and adult sporting events, supporting local non-profits, educating the community–has established her position as a Woman of the Year for Las Vegas. Her dedication to Green One Holdings and focus on educating the public about the benefits of idrink’s nano technology have been instrumental in the company’s growth.

Following the release of this special spring issue of MYVEGAS Magazine, Mariah will also be a guest panelist at the MYVEGAS Magazine’s Top 100 Women of the Year recognition luncheon. Recognized women of Las Vegas will be sharing their stories of success in a room full of women looking to achieve the same. Alongside Mayor Carolyn Goodman, the former First Lady of Nevada Dawn Gibbons and Channel 13 News anchor Tricia Kean, Mariah will discuss what goes into becoming a woman at the top of her industry and the importance of being a member of a community.

Balancing her position as a wife and mother with her career as well as investing so much into her community, Mariah has more than earned the honor of being named a top member of her industry and city.

Green One Holdings, the creators of idrink, is a nutrient company that developed the world’s first multivitamin water. More specifically, idrink is made by a proprietary technology called nanotechnology. Nanotechnology “nano sizes” the nutrients to 1/1000 the size of a red blood cell, which allows for hydration on a cellular level. Simply put, nanotechnology means that when you drink idrink, the nutrients are absorbed rapidly into the body and are bioavailable to “go to work.” Everything else you ingest has to be digested into the walls of your stomach through a longer and much less efficient process (many times the acids in the walls of your stomach break down and destroy much of the vitamins or you expel the rest). idrink hydrates at a cellular level. Additionally, idrink uses an expensive, all-natural alkaline mix in their process to be shelf stable for at least two years.

Green One Holdings is based out of Las Vegas, NV and Budweiser (Nevada Beverage) is the distributor.