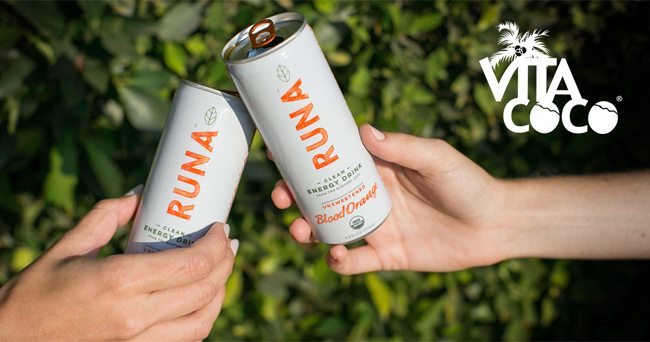 All Market Inc. (AMI), the parent company of coconut water maker Vita Coco, today announced the acquisition of Runa, an organic energy drink brand made with the guayusa leaf.

Runa, founded in 2009 by college buddies Tyler Gage and Dan MacCombie, produces a eight-SKU line of energy drinks made from organic guayusa, a naturally caffeinated plant grown in South America. The company’s vertically integrated supply chain sources its guayusa from Fair Trade certified partner farms in Ecuador. Until they were discontinued earlier this year, the Brooklyn-based company also marketed a line of ready-to-drink guayusa teas and loose leaf guayusa.

The brand has attracted the support of high-profile investors and advisors over the years, including Vita Coco co-founder and CEO Michael Kirban, who joined as an investor and member of the advisory board in 2014. Others include Mark Rampolla, founder of coconut water brand Zico; Brian Krumrei, a former managing director at TSG Consumer Partners; and actors Leonardo DiCaprio and Channing Tatum.

In a call with BevNET this morning, Kirban explained that he saw the brand as an opportunity to disrupt the existing energy drink set.

“I think Runa is perfectly positioned as an organic, better-for-you energy drink that can really challenge in this space,” he said, noting rising consumer interest in cold brew coffee and other drinks with natural caffeine.

Despite consistent growth and investment over the years, however, Runa’s products have been mainly confined to natural retailers. The company has also experienced management turnover over the years; in May, CEO Alex Galindez departed the company, having taken over for Gage in April 2017. MacCombie had left two years earlier.

Since May, investor and board member Tim Sullivan, a former PepsiCo executive, has served as interim CEO for Runa.

“Tim helped a ton as interim CEO getting this deal over the line,” Kirban said. “He will stay on for a transition and then together we’ll figure out his involvement longer term.”

Kirban noted that previous investment rounds for the company were mainly directed towards building its supply chain, and characterized management turnover in recent years as a typical challenge for any startup company.

He said that Runa’s decision in late 2017 to discontinue its tea line to focus on energy drinks represented a shift in which the company “finally started to hone in on what it really stands for and what the proposition is.”

“In my opinion, it’s not a tea at all — it’s an energy drink,” Kirban said. “By really honing in and focusing on the objective, which is challenging conventional energy drinks, and at the same time building a big marketing platform and campaign that is well-funded, is going to make a major difference.”

Ahead of launching in three yet-to-be-announced key markets in September, Kirban said Runa would have a revised can design that will better visually distinguish the sweetened and unsweetened SKUs. He also said there are plans to revive a glass bottle format.

“We will be going really deep in those markets with distribution and marketing across multiple platforms,” he said. “The goal is to start a national launch of the brand in March 2019.”

Kirban said both Runa and Vita Coco would exist as independent companies under the AMI umbrella. Under the terms of the deal, Runa will be 100 percent owned and operated by AMI.

Runa’s current board of directors will be replaced.

“The board [of directors] will be the AMI board,” Kirban said.

Gage, however, will continue to be involved with the company “specifically how it relates to stuff we are doing on the ground in Ecuador,” according to Kirban.

“I’ve gotten to know the Vita Coco guys and I think they are a great fit to take Runa to the next level,” Gage said in a call with BevNET. He described his biggest asset value as “telling the story” of the brand and maintaining the spirit and mission of the company.

In terms of involving some of Runa’s celebrity backers in telling the story, Gage said he’s had conversations with some who are interested in continuing to support the brand in some way but that nothing was imminent.

In addition to his roles as CEO of Vita Coco and AMI, Kirban will also serve as “general manager” for Runa, overseeing the brand as it scales.

As part of the deal, AMI’s sales team of around 150 people, which currently exclusively sells Vita Coco products, will begin working with the Runa brand, both on a national account and in-store execution level. However, Kirban said Runa will have a separate marketing team dedicated solely to the brand. The head of that department will report directly to Kirban.

“Everything else will be going through the current AMI organization,” he noted.

The government of Ecuador also had a seat on Runa’s board of directors, having provided $500,000 in seed capital to help prove the concept, followed by a second $500,000 infusion from the Ministry of Production in 2012. According to a Yale School of Management case study, the national government had a 35 percent stake in Runa’s Ecuador subsidiary.

Kirban declined to comment on the Ecuadorian government’s role or involvement in the structure of the deal. He reiterated that the Ecuador-based supply chain would continue operating as it does today.

The Runa Foundation, an independent non-profit organization that develops projects based around ethical business practices and sustainable agriculture, will also remain intact.

Earlier this month, during a discussion at BevNET Live Summer 2018 in New York City, Kirban spoke of his vision of All Market becoming the world’s “biggest better-for-you beverage company.” Speaking today, he said the acquisition of Runa was the beginning of building that platform, which will be built through a combination of M&A and internal innovation. He teased the possibility of shared innovations between Runa and Vita Coco, noting the good reception for Starbucks’ Refresher products, which combine coconut water and natural energy.

“There’s a lot of opportunity there and nobody is really focused on it,” he said. “Obviously, Coke and Pepsi are the two largest guys playing in the better-for-you space just because of size and scale, but it’s not where their focus is. This is all we do and we think we’re pretty good at it.”

Also on stage at BevNET Live, Kirban remarked how the constant rumors of an impending sale for All Market were “not helpful in any way.” Though some may see the acquisition of Runa as a way to make the company more attractive to prospective buyers, Kirban said he believes the deal will quell rumors of an imminent exit.

“At the end of the day, if we wanted to sell the business, we would work to sell the business,” he said. “What we are looking to do here is create something much larger and much more impactful. This is the start of something really big. I think this will decrease the rumors, because it shows that this is what our focus is — building something bigger.”