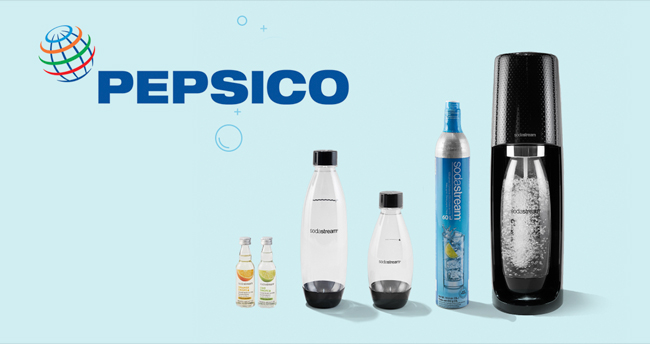 PepsiCo this morning announced it has entered into a $3.2 billion agreement for the purchase of Israel-based SodaStream International Ltd., makers of tabletop machines that allow users to make carbonated water in reusable bottles.

Under the terms of the deal, PepsiCo will acquire all outstanding shares of SodaStream for $144 per share, a 32 percent premium relative to the company’s share price over the past 30 days.

It marks PepsiCo’s largest acquisition since it purchased bottling and distribution affiliates Pepsi Bottling Group and PepsiAmericas, Inc. for $7.8 billion in 2009.

“PepsiCo and SodaStream are an inspired match,” PepsiCo chairman and CEO Indra Nooyi said in a press release. “Daniel and his leadership team have built an extraordinary company that is offering consumers the ability to make great-tasting beverages while reducing the amount of waste generated. That focus is well-aligned with Performance with Purpose, our philosophy of making more nutritious products while limiting our environmental footprint.”

The move pairs one of the world’s most iconic soda makers with a brand which made fighting sugary drinks and bottle waste a central tenet of its identity. In 2014, SodaStream was notably forced by broadcaster FOX to remove the line “Sorry Coke and Pepsi” from its Super Bowl commercial featuring actor Scarlett Johansson. Reacting to the decision, Birnbaum told USA Today: “I’m disappointed as an American.”

In 2017 Birnbaum explicitly challenged PepsiCo after the company used a Super Bowl ad to debut its new electrolyte enhanced water LIFEWTR, which he noted “comes mostly from the same municipal sources as tap water.”

“Shame on PepsiCo,” Birnbaum said in a press release. “I’ll say it till I’m blue in the face: the bottled water industry is the biggest marketing scam of all time.”

Despite the criticism, however, the two companies have worked together before. In fall 2014, SodaStream introduced Pepsi and Sierra Mist flavors for use in its dispensers. At the time, the move stoked rumors that the Israeli company was preparing to sell a stake to PepsiCo or another large strategic.

For PepsiCo, the acquisition further extends its presence in better-for you beverages and more specifically in the zero-calorie sparkling water space, following the successful launch of Bubly in 12 oz. cans earlier this year. It also represents a major escalation of its interest in home-based beverage dispensing systems, which has until now been relatively limited.

In May 2014, PepsiCo announced a licensing agreement with Bevyz Fresh Machine, a home beverage system first introduced in Europe, to make flavor pods for use with the appliance. However, the partnership was subsequently discontinued and Bevyz was later acquired by Keurig Green Mountain (now Keurig Dr Pepper) for $220 million in December 2014.

The Coca-Cola Company similarly attempted to enter the in-home cold beverage market with its $1.25 billion investment in Keurig Green Mountain in 2014. However, Keurig KOLD, a dispenser designed for preparing Coke-branded cold drinks, was discontinued in 2016 due to negative consumer feedback less than a year after its debut, coinciding with Keurig’s being taken private by the JAB Holding Company as part of an ongoing coffee investment strategy.

The deal also marks one of the final chapters in Nooyi’s legacy as CEO, as she announced her planned departure from the company on August 6. The acquisition of SodaStream is part of PepsiCo’s Performance with Purpose initiative, a program implemented by Nooyi which aims to realign the company’s corporate strategy with ethical business practices and environmental sustainability.

Ramon Laguarta, a 22-year veteran of PepsiCo who has served as president since last September, will succeed her.

In the release, Laguarta said that the SodaStream acquisition was part of PepsiCo’s broader strategy of “finding new ways to reach consumers beyond the bottle,” which includes Drinkfinity, Aquafina water stations and Spire, its touchscreen-based dispensing system for on-premise service.

“SodaStream is highly complementary and incremental to our business, adding to our growing water portfolio, while catalyzing our ability to offer personalized in-home beverage solutions around the world,” he said.

According to Bloomberg, SodaStream’s CEO could earn as much as $61 million if the deal is completed.

Analyst reaction to the announcement was mixed. Melanie Felgate, senior consumer insights analyst at GlobalData, called it a “bold and potentially smart move” by PepsiCo. She noted the soda giant could help bring SodaStream — “a relatively niche brand,” according to Felgate — further into the mainstream.

“We can’t help but see parallels to Coca-Cola’s decision to acquire a stake in Green Mountain in 2014, and question whether this deal – which also brings together a large consumer packaged goods company and an in-home beverage maker – will do much to solve PEP’s ongoing struggle to improve volumes in its North American Beverage segment (which, despite sequentially improving in Q2, remain weak),” she wrote.