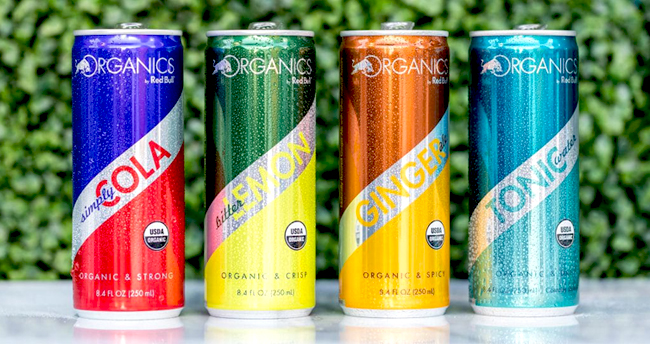 For once, Red Bull has a drink that won’t give you wings.

The energy drink brand today announced the limited U.S. launch of Organics by Red Bull, a four-SKU line of premium organic sodas made with natural ingredients. The line will be available exclusively in just two regions — San Diego County in Southern California, and one area of North Carolina — and via Amazon.com starting on April 2.

Organics by Red Bull will be available in 8.4 oz. slim cans in four varieties: Simply Cola, Bitter Lemon, Ginger Ale and Tonic Water. Simply Cola, which contains a blend of extracts from kola nut, cinnamon, ginger and other natural ingredients, is the only caffeinated SKU (32 mg from organic coffee beans) in the line. The three other flavors are caffeine-free.

In a press release, Red Bull noted that the company “saw the opportunity and need for a premium, organic soda line that would offer consumers a complimentary product with the same quality ingredients and taste that the brand is known for.”

In an email to BevNET, Red Bull indicated that San Diego’s “appreciation for wellness, lifestyle, organic and premium consumer products,” along with the “bustling food scene and appreciation for craft beverages” in North Carolina, made each region “ideal markets” to launch the new product.

Red Bull declined to comment further for this story.

Organics by Red Bull underwent a pilot launch in Austria last summer. The line’s U.S. launch allows the brand to leverage its equity with energy drink consumers to enter new markets, such as craft soda and premium cocktail mixers, while Simply Cola specifically gives the brand a caffeinated SKU made with organic ingredients.

See the full press release below:

SANTA MONICA, Calif. — Red Bull North America announces the debut of ORGANICS by Red Bull to provide consumers a new organic soda choice to enjoy throughout their day. The new line, featuring ORGANICS by Red Bull Simply Cola, , is a range of premium organic sodas made with ingredients from natural sources. Launching April 2, the line will be available where Red Bull is sold in two exclusive U.S. markets – San Diego County and a region of North Carolina – as well as through Amazon.com.

ORGANICS by Red Bull are designed to complement meals, snacks and social outings. They have been certified organic in compliance with the USDA National Organic Program and bear the USDA Organic seal. Like all Red Bull beverages, they are sold in 100 percent recyclable, aluminum cans and are vegan, gluten-free, wheat-free and dairy-free.

For more than 30 years, Red Bull has been Giving Wings to People and Ideas. Last year more than 6 billion cans from the Red Bull Energy Drink product line were sold around the world, 2 billion of those in the U.S. alone. Red Bull saw the opportunity and need for a premium, organic soda line that would offer consumers a complementary product with the same quality ingredients and taste that the brand is known for.