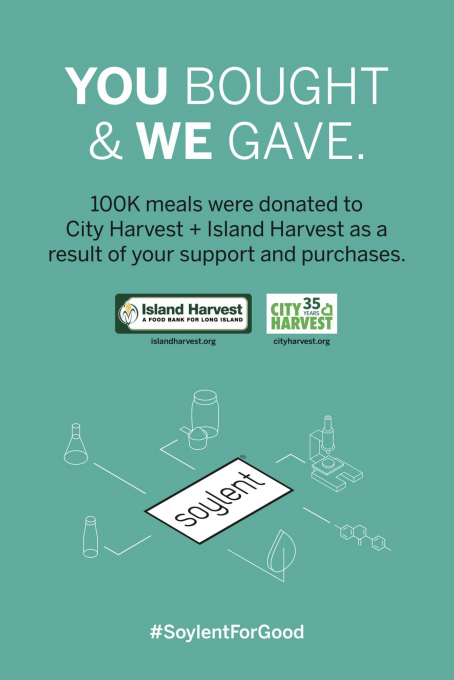 LOS ANGELES — Rosa Foods, the makers of Soylent, today announced a 100,000 meal donation to New York partners, Island Harvest Food Bank and City Harvest, as part of their #SoylentForGood initiative. Soylent’s mission is to eliminate unhealthy, unsustainable, and expensive food voids. This donation marks a significant step in Soylent’s campaign to raise awareness about food insecurity and to address the issues surrounding our food supply throughout the country and across the world.

To date, #SoylentForGood has donated over 1.6 million meals globally. “Our customers have been incredible partners in helping us achieve our mission of delivering complete, convenient, and sustainable nutrition to people in need,” said Soylent CEO Bryan Crowley. “We launched our buy one, donate one campaign this fall with a goal of 50,000 meals and quickly doubled our donation due to the strong support from the community. We are grateful to have partners like Island Harvest Food Bank and City Harvest who work every day to create real impact in their local communities.”

Nearly 2.4 million people in New York state struggle with hunger, with about half that number living in New York City, according to City Harvest — Soylent’s charity partners are leading the fight on hunger everyday. “Island Harvest Food Bank is pleased to partner with Soylent, and we are grateful for their generosity and deep concern for food insecure Long Islanders,” said Randi Shubin Dresner, president & CEO, Island Harvest Food Bank. “Soylent’s donation in support of our work on Long Island will have a positive impact in the lives of our neighbors struggling to put food on their tables.”

According to Feeding America and World Food Program USA, more than 41 million Americans are food insecure and more than 820 million people deal with food insecurity worldwide. Soylent continues to raise awareness of issues surrounding global food supply as well as food insecurity throughout the country and across the world. As part of this work, Soylent has launched their Innovation Lab – a food-tech, co-working space at their downtown LA headquarters which brings together entrepreneurs and startups who are all working to solve the question, “How will we nutritiously and sustainably feed 9.7 billion people by 2050?”

Going further, for World Food Day 2018 on October 16th, Soylent will be donating the funding equivalent of one meal to World Food Program USA for every bottle of their ready-to-drink meals sold on Soylent.com. Through this effort, Soylent hopes to engage their consumers in the fight against both hunger and food insecurity.

Soylent is a pioneer in food technology, producing functional foods that are good for the body and the planet. In 2013, Founder & Chairman Rob Rhinehart developed the first iteration in his kitchen after recognizing the need for a simpler, more efficient food source. Since then, Soylent has made it their mission to eliminate unhealthy and unsustainable food voids everywhere through science and technology, providing complete, convenient and sustainable nutrition to the world. Available at Soylent.com, on Amazon, and in select retail locations, Soylent’s innovative products include Original Powder and 14oz Ready-to-Drink bottles available in Original, Cacao, Cafe Mocha, Cafe Vanilla, Cafe Chai, Strawberry and Vanilla. Soylent is headquartered in Los Angeles, CA.For additional information on retail locations go to https://www.soylent.com/stores/.