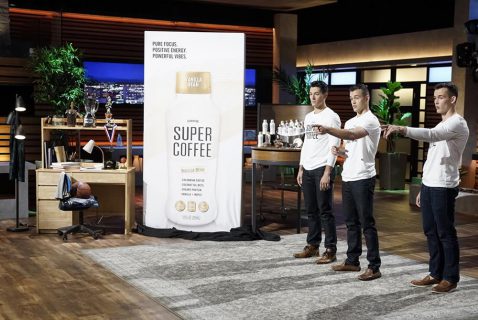 NEW YORK, N.Y. — As a point guard for the Philadelphia University men’s basketball team, Jordan DeCicco refused to settle for the same old sugary bottled coffees and energy drinks sold on campus to get through his early morning practices and classes. Instead, the resourceful teenager decided to create something that he craved — something he felt could change the way his classmates, and possibly others, consumed energy drinks to get through the day. The result was the creation of Super Coffee, which was conceived in DeCicco’s dorm room. After selling the new drink to friends, dorm mates, and classmates around campus, DeCicco knew he had developed something terrific, so he dropped out of college and convinced his brothers, Jim and Jake, to be his new teammates.

After incredible success during the company’s first two years in business, the trio of brothers from Kingston, NY, will be featured on ABC-TV’s Shark Tank on Sunday, February 11, seeking an investment from one of the five sharks. The DeCicco brothers who named the company Sunniva, meaning gift from the sun, entered the tank seeking a $400,000 investment in return for a five-percent stake in their business.

“My little brother, Jordan, refused to settle for the norm. He wanted healthy, delicious energy that worked for him, and he had the courage to create it,” said Jim DeCicco, the oldest of the three brothers. “Super Coffee is designed for ambitious creators who are always on. It’s for the achiever who strives to be better every day on the court or in the classroom or at the office.”

“Coconut Oil has become one of the most popular ‘superfoods’ for its potent good fats, the elusive MCTs (Medium Chain Triglyceride),” said Jake DeCicco, the middle brother. “Research shows America’s food paradigm shifting from a tolerance for carbs and sugars to healthy fats and proteins, and Super Coffee is at the forefront of this movement .”

“This once-in-a-lifetime opportunity is a chance for us to educate our customers on the dangers of added sugars and the benefits of healthy fats and proteins,” said Jordan DeCicco. “I dropped out of school, forfeiting a full-scholarship to share this dorm-room dream with the world. If you believe in yourself and your mission you’ll inspire others to do the same.”

Super Coffee is available on Amazon, and in retail stores between Washington, D.C. and New York City, including Wegmans, Whole Foods, Wawa, QuickChek, Acme and Fairway, among others. Super Coffee is also available in fitness centers, including Equinox, Vida Fitness, Crunch, Tone House, Switch Playground, Rumble and Dogpound, as well as on college campuses, corporate cafeterias and hospitals nationwide. Meet the brothers and sample Super Coffee at drinksupercoffee.com.

Taste Radio: This Is How Innovative Concepts Become Top Brands