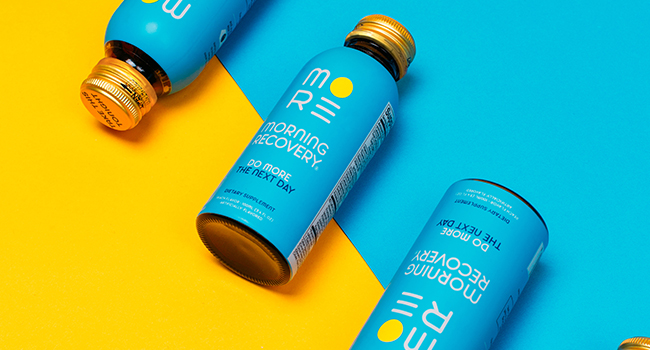 Consumers have spoken, and 82 Labs is listening.

Just over six months after closing an $8 million funding round aimed at supporting growth, the functional beverage startup’s first product, Morning Recovery, a 3.4 oz. shot designed to mitigate the effects of alcohol consumption, is in the midst of making the transition to brick-and-mortar retail. Over the last four-plus weeks, the brand has enjoyed a successful launch at 70 7-Eleven locations in Chicago, one of its three retail test markets along with San Francisco and Los Angeles. 82 Labs founder Sisun Lee described the recent move as part of process that he hopes will lead to an eventual multi-million dollar run rate once the brand moves into mass and conventional grocery channels.

However, by the time the company arrives on those stores’ shelves, it likely won’t look the same as it does currently. Speaking to BevNET earlier this month, Lee said 82 Labs is preparing to rebrand itself as a functional beverage platform in December, which will include the launch of a holistic suite of products aimed at promoting productivity.

“The idea is that we started this company as a way to help people do more of what they love,” Lee told BevNET in an interview earlier this month. Under the new umbrella brand, Morning Recovery will be one of a variety of products aimed at providing different functional benefits; the portfolio will be tied together by the brand identity of “MR,” a nod to the initials of its flagship product and a play on the idea of demanding “more.” “We tackled a very specific niche (hangovers) as a way to broaden that perspective,” he said.

Lee, a former engineer at electric car company Tesla, said the pivot is based primarily on insights gleaned from consumer feedback, which revealed strong traction with higher income consumers aged 30-50 who have an interest in wide range of wellness-related topics, including anxiety relief, improved sleep quality, optimal hydration, and mental acuity. Morning Recovery will lay the groundwork for the company’s next phase in December when it debuts a redesigned bottle label and several new flavors, including a sugar-free variety. The new visual identity will help tie together the forthcoming products, the first of which is set to launch in Q1 2019, under a single brand identity, Lee said.

In anticipation of this expansion, 82 Labs has expanded its staff with several new hires. Lee said the company has built out its in-house product development team, which encompasses areas including regulatory compliance, quality control and formulation. The company has also previously partnered with researchers at the University of Southern California (USC) to fund studies on DHM, the natural flavanoid that serves as Morning Recovery’s functional ingredient. Dr. Jing Liang, MD, PhD, a professor at the School of Pharmacy at USC who has published research on DHM, is a partner in 82 Labs.

“We’ve built this infrastructure where we don’t have a proprietary product ready right now where we can say, ‘We must do this product because there is a specific advantage that we have,’” Lee said. “We feel like, based on what we’ve learned from our customers and based on the long-term trajectory of the company, if we want to move beyond a single product, we’ve assembled a team that can do it. We’ve done this once. Let’s continue to innovate and not be scared.” 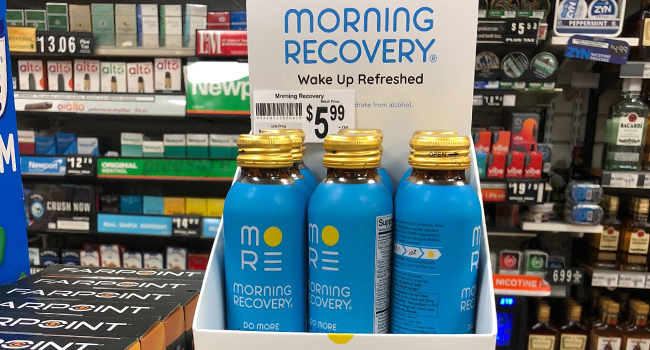 Before showcasing its evolution as a brand, 82 Labs is focused on the immediate task of growing the market for Morning Recovery. The product launched online but has also been introduced at select retailers in the aforementioned markets of Los Angeles, San Francisco and Chicago, the latter of which has seen Morning Recovery sold at independent stores and local chains like Foxtrot Market for nearly a year, serviced by with Heritage Wines. But the company’s partnership with 7-Eleven has only just gotten underway, having launched in 15 Chicago locations of the C-store chain four weeks ago. A total of 70 locations in the city are now carrying Morning Recovery, where it has been merchandised on the same valuable point-of-sale real estate as different functional shots, like 5-hour Energy. As part of the company’s forthcoming rebrand, it will be moving from 6-packs to 12-packs which can transform into a tabletop display for retailers.

Jim Boyci, president of the Midwest branch of the 7-Eleven Franchise Owners Association, which includes roughly 125 stores in Michigan, Indiana, Wisconsin and the Chicago metro area, told BevNET that Morning Recovery is the number one supplement item in both unit volume and dollars since he began selling it six weeks ago. He credits its early success to positive word of mouth, as the product has consistently outsold other RTD supplements, such as 5-hour Energy and Emergen-C, despite a lack of promotional pricing and relatively little consumer messaging.

“I don’t have a hard answer for that,” said Boyci, when asked if he believed if Morning Recovery’s early success was indicative of positive momentum behind the 2 oz. shot category as a whole. At his store in downtown Chicago, Boyci, who was introduced to the product by 7-Eleven’s regional merchandiser, sells Morning Recovery in a two-tier rack by the cash register which holds 24 bottles. “I know it’s been an amazing thing for me,” he continued. “For whatever reason, customers who have tried it and like it on social media are willing to advocate for it, and that’s where the trial has come from.”

Much like the company has done thus far, Lee said that 82 Labs will continue to listen to its growing customer base as it considers future innovations. It’s possible that the brand will venture beyond ready-to-drink beverages, Lee said, but consumer feedback revealed that the majority of Morning Recovery users prefer drinks as their format of choice for functional products. Building rapport and trust with that audience, much like Soylent did in expanding beyond e-commerce and into conventional retail, will be key in helping Lee put the brand on course for the goal of mainstream success.

“We need to build that awareness before we make the next step,” he said. “It’s also the fact that 7-Eleven agreed to put us front-and-center of the point-of-sale; I think that’s huge. If we were in the cooler with other beverages, I don’t think we would be selling like this. Also, our existing consumer base already is in Chicago and we’ve told them to go pick it up. I don’t know which one of those things made the most impact, but I’m sure it’s a cumulative effect.”