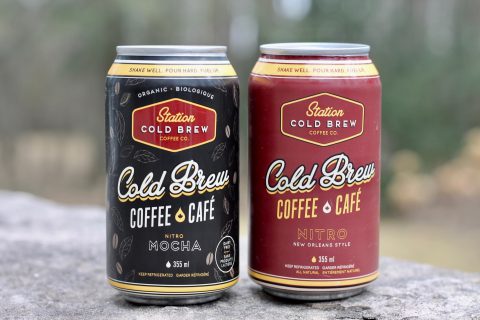 Nitro Cold Brew Coffee is the latest and greatest innovation in coffee. It takes the already smooth, easy drinking attributes of cold brew and elevates it even further. Infused with nitrogen, these cans deliver a creamy, silky smooth coffee experience reminiscent of a stout-style beer. Their cans tell the story with instructions that encourage customers to  “Shake Well, Pour Hard, Fuel Up”

Cold Brew Coffee is arguably the fastest growing beverage category in North America with staggering growth numbers to support. From 2015-2017, Cold Brew Coffee has grown 480% alone with the RTD coffee segment as a whole growing double digits since 2011. Since 2014, Station Cold Brew has positioned itself as the leader in the Canadian marketplace.

Station has expanded their production capabilities 10x to meet the increasing demand from Canadians. The jump into an 11,000 square foot brewery and a brand new canning line allows Station to focus on expanding with major retailers across the country. Station will use this expansion to further develop their product lineup with a heavy focus on their Nitro Cans and Kegs that includes their Signature New Orleans Style, Coconut and launching soon, Mocha.  7-Eleven will be the first major retailer to carry the brand new Mocha flavoured Nitro Cold Brew.

Founded in 2014, Station is Canada’s largest company exclusively dedicated to cold brew coffee. The meticulous slow brew process, replaces heat with time to prove that good things come to those who wait. Station is on a mission to bring clean caffeine to a market saturated by sugary, processed beverages. Their line up of all-natural products can be found in over 1000 retail locations from Vancouver to Montreal. Follow the adventures of the brew crew @stationcoldbrew on Twitter, Facebook and Instagram or visit www.stationcoldbrew.com