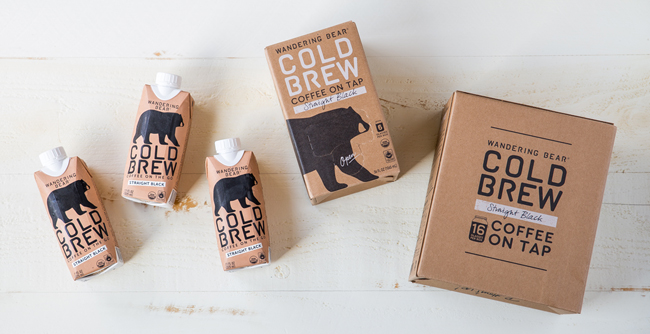 In an interview with BevNET, Wandering Bear co-founder Matt Bachmann declined to identify who led the round, citing an agreement not to publicly disclose the other party. He described the investor as “a single new large equity partner that we view as strategic” and that has made at least one previous investment in coffee. The investor will also be appointing a member to the company’s board of directors.

The raise comes less than a year after Wandering Bear completed a $2.4 million equity raise led by food and beverage venture capital fund AccelFoods last April. AccelFoods and other existing investors, including M3 Ventures, also participated in the new round.

Wandering Bear, founded in 2014, sells its high-caffeine cold brew in 11 oz. single serve cartons, multi-serve bag-in-box taps and in 5-gallon kegs for food service operators. After launching in New York City, the brand is now sold in over 750 retailers, including select Target and Whole Foods locations, in nine states in the Northeast and Mid-Atlantic.

Bachmann said that the new capital is aimed at getting the pieces in place to scale the company, including assembling talent.

“The vision here is to really build out the team, the leadership and the advisory [group] that we need to build a business that’s truthfully even bigger than I think what we had dreamt when we started this,” he said.

By his own admission, that includes shaking off some of the DIY-ethic that has fueled Wandering Bear’s growth thus far, noting that “to really invest in people is the new paradigm.” Strengthening and expanding the sales team will be one of company’s primary goals.

“There are certain things that bringing in individuals that have expertise in wholesale food service and in grocery, those are going to be the key hires,” he said. Wandering Bear has pursued an omni-channel retail strategy in rolling out through the Northeast, which Bachmann called one of the company’s greatest assets as well as a management challenge for the current sales team. “Some sales strategy is blocking, tackling, and execution based on experience,” he said. “We are bringing in that experience to build out a national distribution network.”

In building that network, Bachmann said the sales team would take a data-driven approach based on sales analytics from Wandering Bear’s direct-to-consumer business. “We are following the demand we are seeing in our direct channels in both consumer and B2B and focusing a lot on the whole sales effort to back that up and round our those markets,” he said.

While acknowledging that there is “still a lot of work to be done on the East Coast for us,” he noted national expansion could come quickly after. “I don’t think we’ll suspend our instincts to be methodical and plotting. I just think we’re going to develop a comfort for speed.”

As that strategy suggests, Bachmann sees Wandering Bear as a broadly appealing offering with strong potential for ritual consumption. While still keeping the cold brew’s potent 25 mg of caffeine per ounce, Bachmann spoke about the challenge of making the product broadly appealing without honing in on a single specific callout, such as indulgence or refreshment. In that spirit, the brand released the 11 oz. on-the-go package last September to complement its multi-serve bag-in-box format, with additional (and larger) sizes set to follow in the innovation pipeline.

“Our mission is to create products that people want to consume everyday, and that has a taste component, a functional component and a health component,” he said. “Getting the platform built that’s capable of delivering on those has been a lot of the work over the past year. You’ll see a lot of innovation coming out this year that takes advantage of that.”