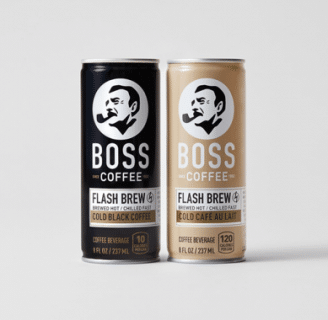 NEW YORK— Suntory Beverage & Food North America LLC is proud to announce the US launch of BOSS Coffee, its ready-to-drink (RTD) flash-brewed coffee brand. BOSS Coffee is currently Japan’s third best-selling beverage, with dozens of unique products and over 100 million cases sold in 2018. BOSS Coffee now aims to serve the United States’ rapidly growing RTD coffee market, which has averaged over 10% year-over-year category growth since 2013. The Suntory family of companies are well known across the US for their high-end Suntory brand Japanese whiskeys, as well as American brands Jim Beam and Maker’s Mark. Internationally, Suntory Beverage & Food Limited also has an extensive portfolio of non-alcoholic beverages; BOSS Coffee will be the first non-alcoholic Suntory brand available nationwide in the US.

“For over 25 years BOSS Coffee has been a favorite in Japan, the world’s largest RTD coffee market. Now, we’re excited to introduce Japanese style flash-brew to American consumers,” said Keishi Fukata, BOSS Coffee’s US brand manager. “Flash-brew may be new to the US, but it has old roots in Japan, where it is revered by coffee aficionados for its distinct flavor profile and silky mouthfeel. We’ve spent decades refining BOSS Coffee, and we believe our time-tested production process offers a rich cold coffee that American coffee drinkers will love.”

Flash brewing involves brewing coffee hot to maximize the extraction of flavor compounds, then cooling it rapidly to preserve them. This as opposed to cold brewing, in which coffee grounds are steeped in unheated water. This flavor difference has a scientific explanation; a 2018 study published in Nature found that hot-brewed coffee contains acid compounds not found in cold brew extracts, as well as higher concentrations of antioxidants. These additional compounds contribute to a more well-rounded and complex flavor. BOSS Coffee has been a breakout favorite in its Colorado test markets since launching in 2018, where it can be found on the shelves of Safeway, Albertsons and King Soopers stores.

BOSS Coffee is currently available nationwide in two flavors: black and café au lait. BOSS’s black coffee is bold, robust and unsweetened – great for coffee purists. The café au lait is creamy and lightly sweetened take on a coffee house brew. Coffee drinkers can purchase 12-packs of BOSS Coffee on Amazon.com for $29.99 (price as of April 2019).

BOSS Coffee has plans for retail expansion in 2019. They hope to usher in a new wave of quality to the US RTD coffee market through their superior quality of Japanese flash-brew.

About Suntory Beverage and Food (SBF)

Suntory Beverage & Food Ltd (SBF) is a global soft drink company with consolidated revenue of approx. 1.3 trillion yen in 2018. Headquartered in Japan and listed on the Tokyo Stock Exchange since 2013, SBF is expanding its business with a diverse portfolio of soft drinks and globally integrated platform in five key regions: Japan, Europe, Asia, Oceania and the Americas. SBF’s vision is to enrich our drinking-experiences to be more natural, healthy, convenient and fulfilling, by leading the next drinks revolution. SBF is a core company of Suntory Group, which was founded in 1899 with consolidated revenue of approx. 2.5 trillion yen in 2018. For further information please visit suntory.com/softdrink/index.html