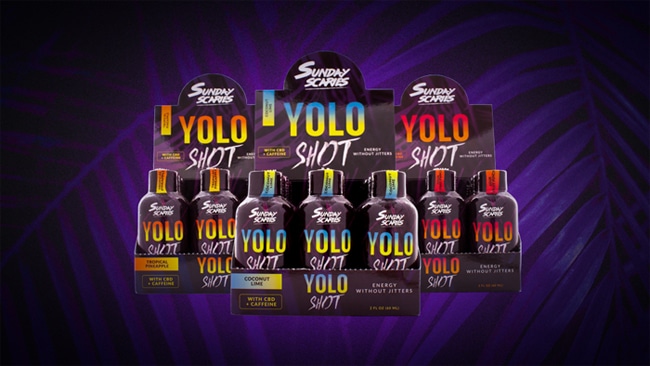 After helping consumers calm down, CBD brand Sunday Scaries’ next goal is to get them re-energized.

This month, the San Diego-based company, which produces CBD infused tinctures and gummy supplements, introduced its first ready-to-drink product: YOLO, a 2 oz. shot that pairs 50 mg of full spectrum CBD with a 200 mg dose of natural caffeine. Available exclusively from the brand’s online store in three flavors — Tropical Pineapple, Coconut Lime and Sour Fruit Punch, YOLO is sold in 12-packs for $69 each, or $61 each for a monthly subscription.

Co-founders Mike Sill and Beau Schmitt noted that Sunday Scaries’ innovation pipeline has been fueled by feedback and interaction from its customer base; for example, after surveys revealed that the presence of gelatin was a barrier for some customers, the brand introduced a vegan-friendly line of gummies. However, YOLO emerged as a result of the co-founders own experiences mixing caffeine and CBD.

“Beau and I just found ourselves mixing CBD with coffee or other energy drinks,” said Sill. “We just found the balance between caffeine and CBD is awesome. There’s a lot of coffee products out there, a lot of local coffee shops doing boosts of CBD, but we didn’t see a lot of energy drinks.”

While Schmitt and Sill embraced the combination, mixing CBD and caffeine may not be as intuitive for other consumers. Thanks to brands like Cuvee, KickBack and Elev8, CBD-infused ready-to-drink coffee is growing but still remains a nascent category. CBD is frequently touted for its calming effects and anti-anxiety properties, putting it seemingly at odds with the louder, more aggressive category identity for energy drinks and shots.

Some of those concerns are addressed directly on YOLO’s packaging: the label uses the tagline “energy without jitters.” In addition to taurine and natural caffeine from green coffee beans, each shot of YOLO also contains 100% of the daily value of vitamins B6 and B12, as well as ginseng herb extract and guarana seed extract. Despite its distinctive positioning relative to the brand’s other products, Schmitt said YOLO fits squarely into Sunday Scaries’ core focus of creating anxiety relief products. 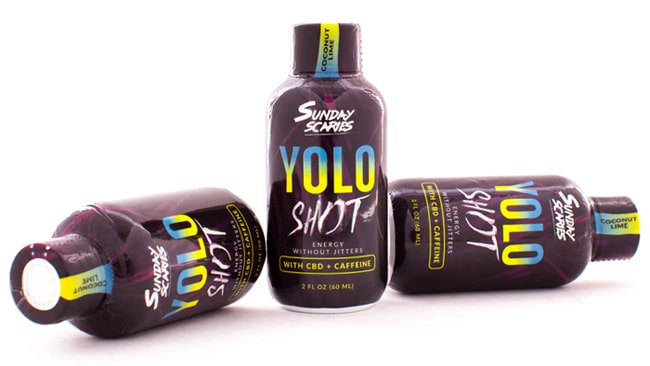 “The joke that we make is that it’s like a natural adderall,” he said. “For me personally, I feel concentrated and focus, and it’s a much healthier alternative for that (effect).”

“The CBD helps you calm down while you body feels energized,” Sill added. “If you are going to a nervous social situation or out to a bar, it will calm your mind from racing thoughts, but still give you the energy to get through the day.”

Placed alongside the company’s gummies and tinctures, YOLO allows Sunday Scaries to extend its reach to new CBD use occasions and formats. But beyond moving to a new category, the energy shot aims to help the company further connect with its core target consumers — men and women ages 25-34, according to Sill — while also bringing new demographics into the brand. Marketing and promotional efforts have been primarily social media-based thus far, but YOLO provides an opportunity to employ new tactics, including a potential college ambassador program similar to those of energy drink giants Red Bull and Monster.

“If you compare different CBD companies – say Charlotte’s Web, CV Sciences, Medterra, for example — all three are great companies,” said Schmitt. “But one campaign we are considering launching is college ambassadors. A YOLO shot for college students makes 100% conceptual sense with our core focus and brand relevance. But Charlotte’s Web isn’t going to go with a mint tincture and have any real conceptual connection to a college student. There would be a misalignment in their core focus.”

Whether they land on campuses or not, YOLO will definitely not be appearing on retail store shelves anytime soon, as the co-founders are committed to scaling the business strictly in e-commerce. However, the shot represents an opportunity for Sunday Scaries to get products into the hands of more consumers, a critical component of its own growth as well as that of the overall CBD category.

“One thing we are really excited about is that the shots are perfect sample sizes — they have a lower cost of goods sold and we can share it with more people than any product that we’ve launched in the past,” Schmitt said. “Because these come in packs of 12 and have multiple flavors, we have greater scalability on sharing the product but also people can be preferential in which flavor of the product they like.”