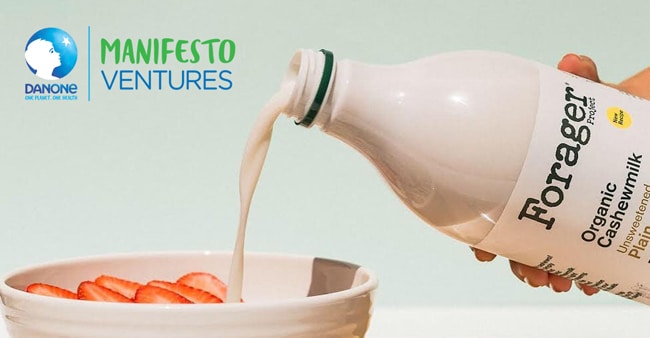 Plant-based food and beverage brand Forager Project announced this week that it has received a minority investment from Danone Manifesto Ventures. Terms of the deal were not disclosed.

Speaking to BevNET today, Forager Project founder and CEO Stephen Williamson said the company had to-date been mainly self-funded with some outside investment by individuals. However, as the company scales, that model has become increasingly expensive.

“The way we had funded the company to-date was every round quarterly, whenever we needed money, I’d write the check,” Williamson told BevNET. “When I was no longer able to do that and we felt that we had to raise a sizable amount of capital, we had to think carefully and diligently about the type of partner we wanted.”

Launched in 2013 initially as a HPP juice brand, Forager Project has pivoted away from the juice category to develop a portfolio of cashew-based dairy-alternative products, including milks, creamers, shakes, drinkable yogurts, yogurt cups, and sour cream. The company also makes a line of kale and spinach chips.

Although the company is preparing to launch several new products in the coming months, including cashew butter and cereal, Williamson said the investment will mainly be used to sustain Forager’s current growth, including expanded distribution and increased brand awareness.

According to Williamson, Forager investor and board member Gary Hirshberg — the founder and former CEO of Stonyfield Farm — recommended Danone based on his own experience with the multinational, which invested in Stonyfield in 2001 before later acquiring the company. Williamson said Danone, which also owns dairy alternative brands such as Silk and So Delicious, gives Forager access to “deep expertise” in production, distribution, sourcing, marketing and sales methods for the U.S. market.

“We’re super focused on growth,” Williamson said. “This [investment] isn’t some free spending spree, this allows us to significantly strengthen our balance sheet and focus on what we think is the opportunity — which is to be the organic plant-based creamery with a premium brand.”

The deal provides Danone with an increased stake in the dairy alternative category. According to a July report by Allied Market Research, the global dairy alternative market is expected to grow 13.3% to $21.7 billion by 2022. According to market research firm IRI, as of August, Forager Project’s cashew milk line reported $455,589 in U.S. multi-outlet retail sales, a 31.2% year-over-year increase. In the same report, the brand’s products classified as milkshakes and non-dairy drinks saw an additional $671,828 in dollar sales, up 27.8%.