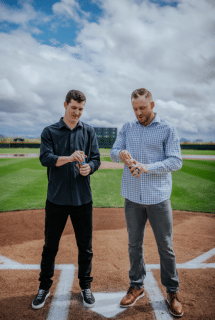 AUSTIN, Texas – Major league baseball players, pitcher Walker Buehler, and power-hitter, Trevor Story, have more in common than their jerseys and positions might suggest: a love of High Brew Coffee. Having only been on opposing sides of the diamond, the two players found common ground thanks to the Austin-based brand. As the 2019 MLB season gets underway, the two rising stars were “Brought Together by High Brew,” a new campaign from the company whose mantra has always been “For Those Who Do.”

Powered by Natural Energy, these division rivals are squared off against each other on April 6, but Buehler and Story have a history that dates back to a May 2018 game in Los Angeles.  Story hit a 100 MPH comebacker that Buehler stopped with his body, and despite being bruised, he recorded the out and stayed in the game. The two first clinked cans of High Brew’s Triple Shot Espresso socially this past March, while starring in a new video celebrating the coffee that fuels them, both on and off the field. It’s not shocking that they found commonality in High Brew’s functional and clean energy benefits, which speaks to the brand’s mantra “for those who do.”

“To me, being a ‘doer’ is having the confidence to not only set expectations for yourself, but to exceed them,” said Buehler. “In the moment, if I can get the right energy, none of it matters and that’s where High Brew comes in.” Story echoes Buehler’s sentiment saying, “being a doer is not having a plan B, plan A is the only plan.” He continued: “I love the clean energy of High Brew Coffee because as an athlete, a big part of it is what you put in your body, and I try to be as natural as possible with what I’m eating and drinking.”

High Brew packs two times the amount of caffeine as a regular cup of coffee and is made from the best direct-trade coffee beans all in a convenient, on-the-go can. With flavors including Black and Bold, Double Espresso, Mexican Vanilla, Salted Caramel, Dark Chocolate Mocha and additional options like Creamy Cappuccino + Protein and new Milk Chocolate + Protein, Triple Shot (for a triple dose of caffeine), and Sparkling, there is an option for just about any “doer” out there.