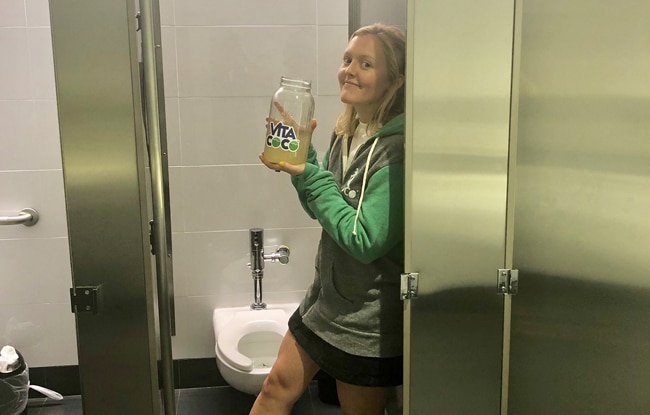 By 3 p.m. their social media coordinator was standing in the bathroom holding a jug of urine and asking for an address where she could mail it.

While associating its products with pee is something most beverage brands tend to avoid, Vita Coco’s risky tweet has been a major success, the company said — one that it’s proud to stand behind. A week later, the viral moment has received more than 4,500 retweets, 32,000 likes, and free media exposure with write-ups in Vox, New York Magazine, Fox News, and Business Insider.

So, as Mashable’s Morgan Sung asked, “How the hell did we get here?”

Speaking with BevNET this week, Vita Coco brand director Allison Finazzo and community coordinator Lane Rawlings (the woman in the photo) said the moment was improvised and authentic, but also tied to the company’s broader Impossible to Hate campaign.

Conceived in coordination with creative partner Interesting Development, Impossible to Hate is focused on promoting the company’s Coconut Water with Pressed Coconut SKU by reaching out to “haters” online and urging them to try the product in order to prove that the drink can win over even the most hardened skeptics. The company used an algorithm to scrape user reviews from Amazon, Yelp, TripAdvisor, and other websites to find users with the highest amount of negative reviews — identifying nearly one million people with more than 40 million combined posts — whom they could try and convert to fans of the pressed line.

“We felt that if we could get a mediocre review from people who are giving one star to the Grand Canyon or a teddy bear, or writing that Chicago ‘is not worth it’, then it would show pressed is truly impossible to hate,” Finazzo said.

On Wednesday, Rawlings was tasked with using the official Vita Coco Twitter account to reach out to users who had in the past tweeted about hating coconut water and engage them directly about the pressed line. That’s when she encountered amateur mixed martial arts fighter Tony Posnanski.

On March 8, Posnanski had tweeted a list of “unpopular opinions,” including that “Candy Corn is absolute trash,” “The Beatles are very overrated,” and that “Coconut water is disgusting.” Rawlings responded to the tweet, telling the fighter there was “such a thing as too many eggs.” After a brief exchange, Posnanski — who had coincidentally written about his hatred of coconut water in The Huffington Post in 2013 (something Finazzo and Rawlings said they were unaware of at the time) — ultimately said the magic words.

The idea came from Rawlings, a recent college graduate who joined the company as an intern in September before starting full time in January. She and Finazzo then took the idea to All Market Inc. co-founder and CEO Mike Kirban, who gave it the green light. Within two hours of Posnanski’s response, Rawlings’ tweet went out and almost immediately took off as Twitter users reacted to the brand’s decision to put a picture of a jar of urine with its logo on it online.

The company even used an alternate photo of Rawlings with the jar as its Twitter profile image for several days.

“We’re not owned by Coke or Pepsi, we weren’t sitting in a boardroom debating and calling legal counsel,” Finazzo said, “It’s just what we do. We try to sell coconut water and have fun doing it.”

Over the past few years brands have taken an increasingly cavalier approach to marketing on Twitter. Unlike the glamour shots and lifestyle ideations that thrive on Instagram, Twitter’s conversational setup favors snarky comedy, irony, and a sense of authenticity — and its skeptical user base can often spot “brand speak” from a mile away. This has led to numerous companies allowing their social media accounts to take a freer tone of voice in communicating with consumers and competitors — whether its Wendy’s suggesting McDonald’s be thrown in the trash, or SunnyD tweeting cryptic, worrying thoughts.

For many online users, Vita Coco seemed to take this marketing style to the next level. The daring nature of the photo — combined with the visceral satisfaction of a brand “clapping back” at a “hater” in real time — appeared to connect with consumers who may have rolled their eyes at less clever social media marketing. Even Posnanski tweeted that he was impressed, although according to Finazzo he has yet to try the product.

According to Rawlings, she had little hesitation about being the face of the moment.

“There was a slight moment where it was like ‘oh my god, what is my dad going to say?’” she said. “But moving forward I’ve gotten so many really wonderful reactions and people praising me, which feels kind of bizarre.”

Finazzo said in many ways the stunt fits Vita Coco’s brand identity and demonstrates how the brand is able “to move quickly, be agile, and take risks at the highest level of the organization.” She said the tweet was meant — and received — in good humor, and not intended to be combative or snarky. Instead, the tweet showed “that the brand has a human element to it.”

As for the Impossible to Hate campaign, the company plans to continue rolling out promotions throughout the summer. In addition to video content, Vita Coco will be announcing a money back guarantee within the next week where consumers who try the pressed flavor can receive a coupon refund if they dislike it. The company’s field marketing team will also run sampling demos nationwide. Finazzo added that Twitter will continue to play a role in the company’s marketing.

“I think it’s been an amazing way for us to truly have people appraise and reappraise the brand who weren’t really thinking about Vita Coco before,” Finazzo said. “The tone and how we handled this interaction speaks a lot about our brand, our values, our culture, and our personality. The fact that people are seeing that on such a grand scale is really exciting to us because it gives us a platform to continue to communicate in this way.”

And, for the record: Yes, it’s real pee.