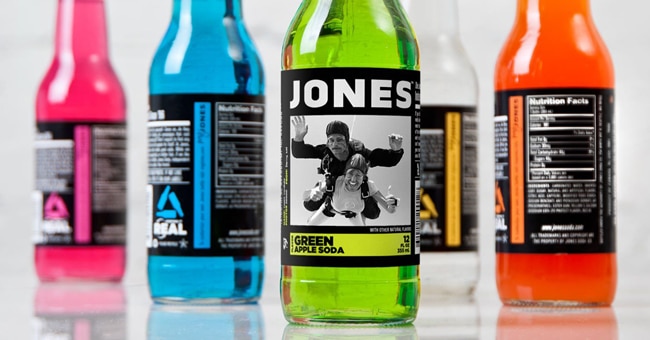 Jones Soda Co. reported a 10 percent decrease in year-over-year revenue in the second quarter in an earnings call with investors yesterday. During the call, Jones CEO Jennifer Cue also discussed hemp and CBD company Heavenly Rx’s recent investment and the company’s plans for the development of a CBD-infused beverage line.

Total revenue in the second quarter was $3.5 million, down from $3.9 million in the same quarter last year. Net loss was $576,000, compared $363,000 the year prior. According to Cue, the drop in revenue was mainly due to a 54% decrease in its fountain business caused by limited time offerings at retailers that were not continued in 2019. During the quarter, fountain decreased from 15% to 8% of Jones Soda’s total business. The revenue was offset by an increase in Jones Soda’s revenue from 7-Select, 7-Eleven’s private label.

As a result of its Walmart rollout and reformulating to a recipe with all natural colors and flavors, gross profit as a percentage of sales was 22.6%, decreasing from 23.2% in last year’s second quarter. The company launched 4-packs of its craft soda in 1,000 Walmart locations at the end of April and announced a transition to a natural formulation for its glass bottle offerings in January.

Revenue for Lemoncoco, the brand’s canned lemon and coconut offering, decreased 37% from Q2 last year, accounting for 3% of the company’s business. Cue said this was due to production capacity issues that limited the brand’s inventory and prevented purchase orders from being filled and lead to a “significant outcry from both consumers and retail partners.” Cue claimed Lemoncoco’s revenue would have increased had the inventory been available, and that the issue has been resolved as of July 31.

This quarter saw a 44% increase in revenue from 7-Select, increasing the company’s total business percentage by 6% from last year’s second quarter. Cue said this was due to the company entering more than 1,000 new locations of 7-Eleven’s Sunoco banner this quarter and launching several new SKUs, including Airheads Cherry Pineapple Blast.

“The continual expansion to additional locations and the demand for our innovative product collaborations further demonstrate the opportunity for our soda offerings through the 7-Eleven channel,” said Cue.

Cue also discussed hemp and CBD company Heavenly Rx’s investment in Jones Soda, announced on July 11, which she said would be “transformational” for the company. She said the new capital will help the company “grow and enhance” its current portfolio as well as develop new lines, including CBD-infused beverages. In April, cannabis investor SOL Global purchased a 9.8% stake in Jones Soda and closed a $12 million private placement financing for Heavenly Rx.

“Heavenly Rx brings a vast amount of experience in product innovation, sales and marketing in the retail industry and we will leverage these relationships to significantly increase our brand’s footprint,” said Cue.

Jones Soda also announced yesterday the appointment of Paul Norman, Heavenly Rx chairman CEO, and marketing executive Clive Sirkin to its board of directors. Both are former Kellogg’s executives.

“Both of them have proven backgrounds in implementing and executing various strategies to expand the portfolios and footprints of household brand names,” said Cue. “We believe they will be invaluable assets as we look to accelerate growth within our current portfolio and enter into new markets.”

Cue said Jones Soda has been developing concepts itself for the CBD line, and is currently “in the process of merging” those ideas with Heavenly Rx. Though there is no timeframe for the line’s development, she said the process will be “as expeditious as possible” and launch “as soon as possible.” She also said Jones Soda has discussed these possible new CBD lines with its current retail partners.

“Although we are still in the early days of this partnership, we are very impressed with their team and believe this positions us to significantly grow our brand while staying true to the independent brand image that customers have come to love,” said Cue.