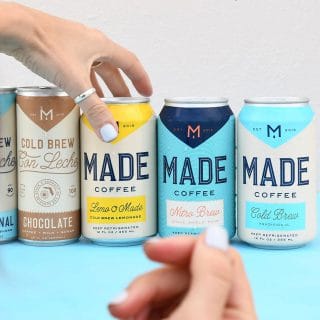 TAMPA and CLEARWATER, Fla.— Florida’s cold brew ready-to-drink coffee leader, MADE Coffee, has announced it has received a major investment from the GRAMMY Award-winning global superstar and entrepreneur Armando Christian Perez, aka Pitbull, making him an equity owner in the Made brand.

Chris Dowd, a Tampa investor and co-founder of Clearwater-based Made Coffee, said Perez had been evaluating coffee industry businesses for investment and chose Made Coffee for a “significant stake” because of its potential to become a dominant player in the cold brewed ready-to-drink (RTD) coffee and related consumer products categories nationwide.

“Made Coffee is a Florida-based independent enterprise and has taken impressive short steps toward building its long-term vision,” said Perez. “After evaluating its operations, it became clear that the founders are visionaries and that I wanted to be a part of their journey. The brewing process and marketing talent, the management team’s business acumen and their array of products are impressive assets that position the company for success in pursuing its aggressive growth and revenue objectives.”

Two years ago, when the company was just beginning, Made Coffee partners Michael Rideout, Taylor Prater, Chris Dowd and Scott Dobbins were discussing who would be their ideal partner in the future, and decided they would approach Perez when the time was right.

After experiencing explosive growth with over 4,000 points of distribution for their ready to drink canned coffee products, including placement in all 845 Publix Super Markets in Florida, Perez’s interest was piqued.

“Armando’s addition to the Made Coffee team is a game changer,” said Michael Rideout. “He’s built a global brand through hard work, foresight, leadership and perseverance. This partnership has been an inspiration to our entire team, and we look forward to executing our plan to become the consumer go-to choice for ready-to-drink cold brew coffee and other proprietary products we have in the R&D pipeline.”

From Mr. 305 to Mr. Worldwide, Armando Christian Perez, a.k.a. Pitbull, rose from the streets of Miami to exemplify the American Dream and achieve international success as a GRAMMYÆ award-winning global superstar, business entrepreneur, education ambassador and motivational speaker. Pitbull has landed #1 hits in over 15 countries, sold over 80 million singles, has more than 84 million Facebook/Twitter/Instagram followers and over 13 billion views on YouTube. In addition to the United States, his sold-out world concert tours have taken him to North and South America, Europe, China and Japan. Along the way, he has co-headlined with Enrique Iglesias, toured with Britney Spears in the U.K. and Europe, and spoken to thousands as part of Tony Robbins’ motivational seminars. Pitbull also serves as ambassador to the Sports Leadership Arts and Management (SLAM!) charter schools he helped to establish.

Founded in May 2017, Made Coffee has experienced unprecedented growth since its inception. An early pioneer in the Ready To Drink (RTD) coffee space, Made Coffee has the distinction of being both Florida’s and the Southeastern United States’ first canned Cold Brew and Nitro Brew products, produced in a facility that imports, roasts, packages and distributes all under one roof. Headquartered in Clearwater, FL in a brand new, state of the art facility, Made Coffee currently has more than 4,000 points of distribution within Publix Super Markets, convenience stores, fitness facilities, cafés, bars and restaurants.