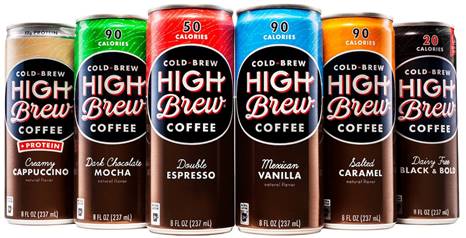 AUSTIN, Texas– High Brew Coffee, an Austin-based natural beverage company, is excited to announce a new celebrity investor in singer, songwriter and music superstar, Shakira. The savvy businesswoman is using her talents to help bring High Brew’s “For Those Who Do” message to a larger, diverse audience.

Shakira was drawn to High Brew’s portable cans and double kick of caffeine thanks to her busy schedule as a performer and mom of two. However, the mogul knew there was a bigger opportunity to be had with the brand than just a quick pick-me-up. She was also excited to learn that the brand is sourcing premium coffee beans directly from the De Los Andes cooperative in Colombia, her home country. Looking to expand her investment portfolio and work with a company just as dedicated as her to hardworking values, Shakira made the decision to approach the High Brew team about an investment.

“Every day seems busier than the last, whether I’m on tour, in the studio, or at home with my kids. I am always trying new convenient foods and drinks that will give me energy and keep me focused but don’t sacrifice quality ingredients or taste,” said Shakira. “After discovering High Brew and then meeting with the founder, I knew this was a brand I aligned with. I decided to invest because the brand continues to innovate while maintaining product integrity and their values.”

Shakira joins a group of other notable investors including singer Halsey, former MLB pitcher, Huston Street, pop rock group, Kings of Leon, Lance Armstrong and chef, Tim Love.  High Brew has always been a brand “for those who do” so it’s no surprise that such as diverse group of “do-ers” have been so naturally drawn to the brand. High Brew contains two times the amount of caffeine as a regular cup of coffee and is made from the best direct-trade coffee beans all in a convenient, on-the-go can.

“While most people know Shakira as the mega superstar singer she is, we were immediately drawn to the success she has found in her many other business ventures,” says David Smith, High Brew Coffee founder. “Knowing she was a fan of the brand, we knew we had to bring her on board. As a strong woman who pours her heart into all she does, Shakira is the perfect fit to help us convey our clean energy message as she continues to dominate the music industry.”

Over the course of her career, Colombian singer-songwriter and GRAMMY winner Shakira has sold over 60 million records worldwide and has won numerous awards including three GRAMMYs, eleven Latin GRAMMYs, and several World Music Awards, American Music Awards and Billboard Music Awards, to name a few. She is the only artist from South America to have a number one song in the US, and has had four of the 20 top-selling hits of the last decade.

At the age of 18, she founded the Pies Descalzos (Barefoot) Foundation which currently provides education and nutrition to over six thousand impoverished children in Colombia and is expanding its work to other countries, including newly launched projects in Haiti and South Africa.

In October 2011, Shakira was named a member of President Obama’s Advisory Commission on Educational Excellence for Hispanics.  Shakira served as coach on the 4th and 6th season of “The Voice,” NBC’s hit reality vocal competition series that searches for the nation’s best voice.

Her tenth studio album “Shakira” was released in 2014, featuring hits such as “Can’t Remember to Forget You,” with Rihanna and “La La La (Brazil 2014)” which she performed at the finals of Fifa’s World Cup 2014 in Brazil. In 2016, she starred as Gazelle in Disney’s record-breaking film “Zootopia,” as well as contributing to its soundtrack with “Try Everything”. In June, she launched “La Bicicleta” with fellow Colombian artist Carlos Vives, which broke records in Colombia when it remained #1 for 18 consecutive weeks and spent 13 weeks at #1 in Spain, as well as reaching #1 on US Latin iTunes. The video, shot in Shakira and Carlos’s hometowns of Barranquilla and Santa Marta, respectively, has over 1 billion views on Vevo to date. It was followed up by the seductive track “Chantaje” (Blackmail) feat. Maluma. With over 2 billion views on YouTube, it is one of the platform’s biggest Latin hits in history. It also reached #1 on the “Latin Airplay” chart and was certified Double Platinum in Spain. Shakira recently released her 11th studio album, “El Dorado” which was recorded primarily in Spanish. Upon release, the album charted #1 on iTunes in 37 Countries, won Best Pop Vocal Album at the 2017 Latin Grammy Awards, and Best Latin Pop Album at the 2018 Grammy Awards. It has also been nine-times RIAA platinum certified in the US.  In November 2018 she wrapped the hugely successful El Dorado World Tour, which spanned 22 countries worldwide with nearly 1 million attendees. She is currently preparing to record her next studio album.