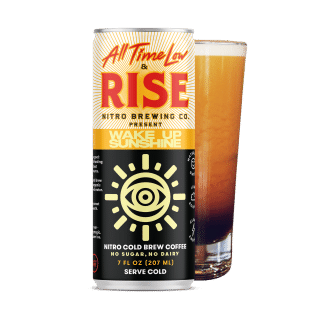 To promote their upcoming full-length album, the band is launching a “Wake Up, Sunshine” Nitro Cold Brew four-pack as part of their “Wake Up, Sunshine” digital album bundle which will be released on April 3rd. Following the album release, the collaboration will be available individually via All Time Low’s channels as well as within RISE café locations. “Fans have often asked us about our routines and what kind of coffee we enjoy specifically – in our travels we’ve been able to sample some of the best…(Australia really holds it down). Working with RISE on bringing a simple, easy, healthy coffee option in a very accessible form to our fans allows us to share another aspect of ourselves with them directly,” stated band member Alex Gaskarth.

The band partnered with Wines that Rock to launch a limited-edition Cabernet Sauvignon aptly named “Everything is Wine” to celebrate their single, “Everything is Fine.” After high demand, the band created a popular two pack with the addition of a Sauvignon Blanc. “A lot of the time after a show, a bit of wine is how we wind down. Again, in traveling the world, we’ve been lucky enough to experience a lot of different varietals and build up an appreciation for wine and how it speaks to the experiences of many different regions. We’ve worked with Wines that Rock and the wine team at E2 Family Winery on several different wines now to cultivate and bring a piece of that experience to our fan base, and hopefully to expose more people to the world of wine on a larger scale,” shared Gaskarth.

About All Time Low

Throughout a catalog streamed nearly half-a-billion times and highlighted by two gold albums, two gold singles, and a platinum single, All Time Low perennially raised the bar for both pop and punk. Since 2003, the group notched five straight Top 10 entries on the Billboard Top 200, spanning the gold-certified Nothing Personal [2009], Dirty Work [2011], Future Hearts [2015], and Last Young Renegade [2017]. The latter attracted tastemaker acclaim from the likes of Rolling Stone, Paste, and more as the band canvased the world, headlining arenas on three continents. 2019 saw them celebrate Nothing Personal with a string of sold-out shows and a re-recorded live performance of the album at RedBull Studios. The record’s influence remained prevalent with Rock Sound citing its impact on Fall Out Boy, 5 Seconds of Summer, and more. Along the way, they achieved honors such as “Album of the Year” at both the Alternative Press Music Awards for Dirty Work and Rock Sound Awards for Last Young Renegade. After nearly two decades together, All Time Low rekindled the spark they first ignited in a Baltimore basement on their 2020 eighth full-length studio album, Wake Up, Sunshine [Fueled By Ramen]. These four lifelong friends—Alex Gaskarth [lead vocals, guitar], Jack Barakat [lead guitar, backing vocals], Zack Merrick [bass, backing vocals], and Rian Dawson [drums]—walked into a tiny room, plugged in, and turned up with the same spirit, but a little more wisdom, a lot more experience, and proficiency gained by performing to millions worldwide. As a result, they delivered a dynamic body of work at the apex of pop punk prowess, rock energy, and genre-busting adventurousness.

Warner Music Artist Services is a global team with a simple ethos: put the artists first. Our team is made up of engineers and marketers, graphic designers and salespeople. We are creative and detail-obsessed. Above all, we are music fans – unabashed, enthusiastic music fans. We are passionate champions of our artists, and we work tirelessly to deliver for them every album cycle, every tour, every day. We are flexible, agile and strategic. Our global sales and marketing teams provide a broad suite of expert commercial and marketing knowledge. We utilize the latest digital marketing technology, develop infrastructure and execute strategy through consumer analytics, emails marketing, and CRM expertise that turns the artist goals into “must have” opportunities for fans.