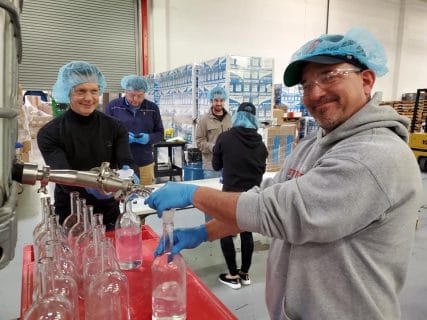 CARROLLTON, Texas– On Friday, March 20, the CEO and founder of BuzzBallz, LLC/Southern Champion, Merrilee Kick, decided to adjust operations from solely cocktail production to add the creation of hand sanitizer, which would be donated to health care facilities, municipalities, and retail personnel in Texas. This decision was reached after the U.S. Food and Drug Administration (FDA), Alcohol and Tobacco Tax and Trade Bureau (TTB) and Centers for Disease Control and Prevention (CDC) issued an emergency allowance for distillery owners to create hand sanitizer, which lifted customary limitations.

That day, Kick contacted the Vice President of Sourcing and Supply Chain Management at Texas Health Resources, Nate Mickish, to see if hand sanitizer was needed.

“He said, ‘three out of their 14 hospitals were in dire need of hand sanitizer,’ so, I rallied our team…,” Kick said. “We also had a call from ProPath, which handles the pathology labs in North Texas.”

“The World Health Organization (WHO) listed a formula that we were required to use,” Kick said. “So, our heads of procurement, marketing, sales and finance teams went out into the market to find things like 100 percent pure glycerin to add to the batch.”

The WHO guides governments around the world in providing premium health care for all citizens. This organization has been actively working with the United States government during the current pandemic to efficiently flatten the spike in COVID-19 cases.

According to Nassiri, hand sanitizers have historically been considered a drug, requiring a pharmacist on staff to regulate production. However, due to recent events, the TTB has lifted this and several other requirements to allow distillers to be of service during the mass hand sanitizer shortage.

A representative from ProPath picked up bottles of hand sanitizer Monday, March 23.

BuzzBallz/Southern Champion, LLC is a woman-owned and family-operated Texas distillery and winery founded in 2009 as the result of Merrilee Kick’s master’s degree thesis project. In a little over 10 years, BuzzBallz/Southern Champion, LLC has greatly expanded its product base and begun to grow into a worldwide brand. The company is the only woman-owned combination winery/distillery in the US, this company has gained significant recognition, boasting distribution in 45 states, several countries abroad and growing. The company maintains a fun brand message as they create high-quality, premixed cocktails, as well as small-batch spirits. Learn more at southern-champion.com/ and www.buzzballz.com.