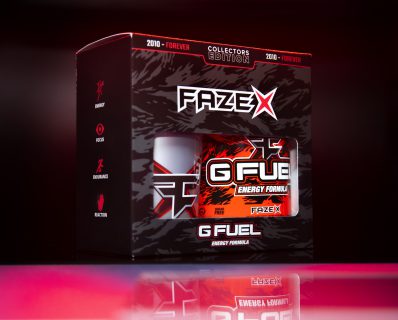 NEW YORK— G FUEL, The Official Energy Drink of Esports®, in partnership with FaZe Clan, the world’s most prominent and influential gaming organization, announced it will launch a new “FaZe X” flavor on October 21st. The new flavor is a celebration of FaZe Clan’s 10-year anniversary and comes on the heels of stage one of G FUEL and FaZe Clan’s #FaZe5 Recruitment Challenge.

G FUEL FaZe X has a mysterious icy flavor that you just have to try to get the full, energizing experience. The new flavor is sugar-free and loaded with antioxidants from 18 different fruit extracts. A serving of G FUEL FaZe X has only 15 calories and contains 140 mg of caffeine and proprietary energy and focus-enhancing complexes.

“The past eight years of our partnership with FaZe Clan, and riding with them on their journey from being a YouTube sniping team to now a worldwide gaming powerhouse, have been nothing short of amazing,” said G FUEL Founder and CEO, Cliff Morgan. “We are proud to continue to expand our eight-year partnership and release our eighth co-developed flavor together. Our fans are in for a real surprise with FaZe X.”

“We continue to reinvent the partnership game with our title sponsor G FUEL with the official release of the FaZe X flavor created to celebrate ten years of FaZe Clan. The FaZe X flavor is dropping in the midst of our FaZe 5 recruitment challenge, which drew over 200,000 applicants. The top five winners will not only become FaZe Clan members, but they’ll also take home a $20K cash prize and a sponsorship agreement provided by G FUEL. This is an incredibly exciting time for both brands,” said FaZe Clan CRO Jeff Pabst.

In honor of the new flavor and FaZe Clan’s 10-year anniversary, G FUEL and FaZe Clan are also launching a huge FaZe X giveaway on October 22nd. Prizes will include a one year-supply of G FUEL, exclusive FaZe Clan merch, and a whole lot more. Be sure to follow and stay tuned to @GFuelEnergy and @FaZeClan on social media for more information.

G FUEL FaZe X will be available for sale in 40-serving tubs and limited-edition collectors boxes, which include one 40-serving FaZe X tub and one 16 oz shaker cup, at gfuel.com on October 21st. Sign up to get early access to G FUEL FaZe X at gfuel.com/pages/faze-x.

Since its inception in 2010, FaZe Clan has established itself as the world’s most prominent and influential gaming organization known for its disruptive original content and hyper-engaged global fanbase of 230 million combined across all social platforms. FaZe Clan holds an unrivaled position at the epicenter of gaming, sports, culture and entertainment, driving how the next generation consumes content, plays and shops. Their roster of 85 influential personalities consists of world-class gamers, engaging content creators and a mix of talent beyond the world of gaming, including NBA star Ben Simmons and global superstar artists Offset and Lil Yachty. The organization’s unmatched esports division includes eight competitive teams in Fortnite, FIFA, PUBG, PUBG Mobile, Rainbow Six, Call of Duty League (Atlanta FaZe), CS:GO and VALORANT with dozens of world championship trophies among them. In addition, FaZe Clan has become a sought-after fashion and lifestyle brand through an inspired apparel line and limited-edition collaborations with partners including Champion, NFL, Manchester City FC, Lyrical Lemonade, Kappa, CLOT, LA Kings, and more. Follow us @FaZeClan, @FaZeApparel and @FaZeUpdate.