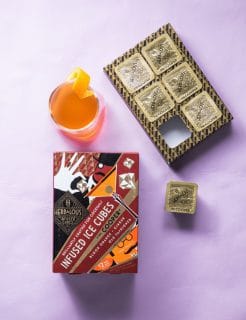 PHILADELPHIA— Herb & Lou’s Infused Cubes, the pre-packaged cocktail mixers designed for crafting cocktails at home or away, announced the appointment of beverage veteran John Wolgamot as their Director of Sales.

“We are pleased to add John to our team, and he will head or sales and distribution efforts,” says Co-Founder Reid Rosenthal. “John has a great depth of experience coming from years of successful brand development and distribution network expansion with Pepsi-Cola, SoBe Beverages and Cadbury Beverages, (now Keurig Dr Pepper).”

“We know that the spirits platform, as well as premium mixers are on fire right now,” says Wolgamot, who plans to expand distribution online, in stores, and expand into DSD networks that will initially target liquor/wine/beer retail merchants and grocery stores. The company growth is being support by market trends that were recently reported in Forbes –   “Distilled Spirits Council of the U.S. (DISCUS), the national trade association representing leading producers and marketers of distilled spirits sold in the U.S., supplier sales in the U.S. were up 5.3% in 2019, increasing by $1.5 billion, to a new record of $29 billion.”

Wolgamot added, “This distilled spirits record growth isn’t going away, and is the perfect storm of new business opportunity for high quality brands like Herb and Lou’s that are  adding incremental volume and dollars to retail and distribution partners, with no product overlap or cannibalization.”

About Herb and Lou’s

A “Nightclub & Bar” Entrepreneurs of the Year award winner, and recognized by In-Style and Oprah Magazines, Herb & Lou’s has been revolutionizing the at home cocktails experience since 2015 with its five selections of non-alcoholic cocktail mixers.  Once frozen, each flavored cube is dropped into a single serving of one’s favorite liquor and is then shaken, stirred or served on the rocks, for a perfect cocktail.

Recently, Herb and Lou’s have launched two new flavors. The Oliver, an unclassic negroni mixer profile with wormwood extracts that is crafted to complement gin, while The Seymour, a Meyer Lemon Daiquiri with Bergamot, Chamomile and Vanilla mixer, is imagined to pair with rum. The new flavors join Herb & Lou’s three original products, The Cooper (for bourbon/whiskey), The Clyde (for vodka) and The Cecile (for tequila). All Herb and Lou’s flavor have been crafted to pair with your favorite spirit, but can also be combined with seltzers, tea’s, and other beverages to create easily configured premium mocktails. (see more details at herbandlous.com).

Herb & Lou’s decided to introduce its two latest flavors as retailer interest peaked at trade events such as The Fancy Food Show. “It quickly became clear to us that there is just as much of a market for gin and rum pairings as there is for bourbon, vodka, and tequila mixers,” said Reid Rosenthal, one of the company’s founders. “Everyone has a favorite spirit, and we want to empower all consumers who have an appreciation for craft cocktails, whatever their favorite may be, and provide consumers the ability to create a quality drink in their own kitchen.”

All 5 Herb and Lou’s flavors are made here in the U.S. and are now available in both 12 packs and 6 packs, both online at herbandlous.com and nationwide at retailers like Crate and Barrel, Neiman Marcus and Nordstrom. Their in-store retail footprint also continues to expand in grocery and liquor stores channels.