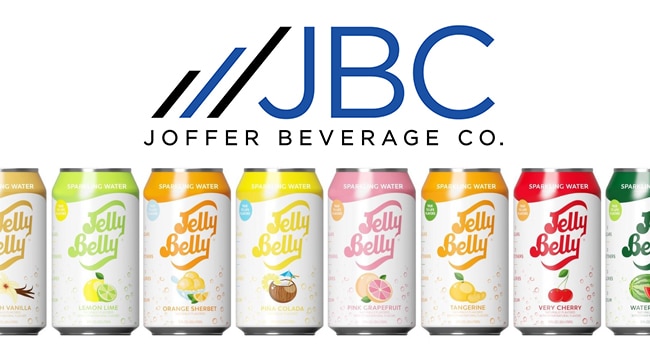 Aiming to bring “fun and flavor” to the category, Joffer Beverage Company has launched a new flavored sparkling water line offering consumers the classic taste of Jelly Belly jelly beans without the sugar or calories. Founded by members of the Jelly Belly Candy Company family, the Joffer Beverage Company has licensed the jelly bean maker’s brand name for the new line, which is rolling out in all Hy-Vee locations today.

Jacksonville, Oregon-based Joffer Beverage Company was founded by brothers Ben, Stephen and Justin Joffer, all of whom are sixth-generation members of the candy-making company, along with their parents Andy Joffer, VP of sales for corporate accounts at Jelly Belly, and Becky Joffer, sister to Jelly Belly CEO Lisa Brasher.

Speaking to BevNET, Ben and Stephen Joffer said the idea from the sparkling water line came during a Mother’s Day party last year, when members of the family were drinking some “popular sparkling water flavors.”

“We were like ‘Somebody’s gotta do this and just really nail the flavors.’ And that’s when my dad piped up and said ‘Why not us? Why not Jelly Belly?’” said Ben Joffer.

The brothers said they began working on mock-ups of can designs within a week, and then started to sort through the over 100 Jelly Belly flavors — which span from cherry and lime to buttered popcorn and toasted marshmallow — to find the “most drinkable” flavors. Originally planning to launch with four flavors, they said they eventually landed on eight — French Vanilla, Lemon Lime, Orange Sherbet, Piña Colada, Pink Grapefruit, Tangerine, Very Cherry and Watermelon — coincidentally the same number of jelly bean flavors Jelly Belly originally launched with in 1976. The complete flavor lineup rolled out at Hy-Vee today with a suggested retail price of $4.99 to $5.99 for 8-packs of 12 oz. cans, with an online launch set to follow soon.

“Starting smaller would’ve been easier, but we decided ‘Let’s start big and just get bigger from there,’” Ben Joffer said.

According to Stephen Joffer, the lineup was chosen to include both “iconic” sparkling water flavors and ones that are “more unique” in the category. The brothers said consumers’ familiarity with the Jelly Belly brand and its reputation for “powerful” flavors will help to differentiate this sparkling water line in an increasingly crowded category.

“People know us for being really precise with our flavors,” said Stephen Joffer. “If you pick up a Jelly Belly bean that is pink grapefruit, you know it’s going to taste like pink grapefruit, and we wanted the exact same thing with our sparkling waters.”

Ben Joffer said the team plans to conduct in-store sampling in the coming weeks to get direct feedback from consumers, part of a grassroots marketing effort that also includes utilizing social media and influencers to raise brand awareness.

As part of these marketing efforts, Ben Joffer said it’s important to communicate to consumers that though their flavors were inspired by the sugary candy, the beverage “truly is sparkling water” and as such doesn’t contain any calories, sugar or sweeteners. The goal, he said, is to appeal to a wide audience of consumers, from mothers wanting a healthier option for their kids to millenials like himself that he’s seen making the jump from soda to sparkling water.

“Ultimately our goal is to have sparkling water for every consumer,” said Stephen Joffer.