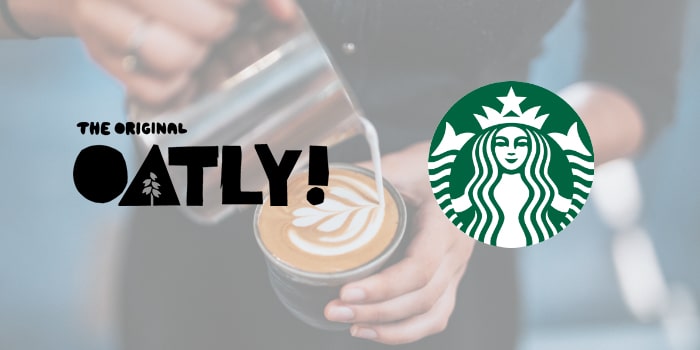 Aiming to triple its distribution and open up West Coast production, Oatly has partnered with Starbucks to serve as the coffee retailer’s on-premise oat milk supplier for a test run in 1,300 Midwest cafes.

Starbucks announced yesterday that it is expanding its plant-based milk offerings with the roll out oat milk to participating stores in Illinois, Indiana, Iowa, Michigan, Minnesota, Missouri and Wisconsin. Speaking with BevNET, Oatly U.S. general manager Mike Messersmith said that the Swedish import brand will serve as the core supplier of oat milk products for Starbucks with its barista blend variety.

According to Messersmith, the partnership serves a validation of oat milk’s credentials as a long-term subcategory in the plant-based milk space. He noted that the mainstream reach of Starbucks will help drive trial and draw new consumers into the space, and that the partnership could expand in the future.

“While this is a regional launch, we do think it’s a really cool step forward for the growth and prioritization of plant-based overall and for bringing those options to more people,” Messersmith said. “The Midwest is one of our strongest regions and our growth in the Chicago area has [made Illinois] one of our biggest states.”

The Starbucks partnership comes as Oatly aims to “double or triple” its retail distribution in 2020 in an effort to catch up with competitors that quickly outpaced Oatly during the brand’s out-of-stock crisis in 2018 and early 2019. According to Messersmith, Oatly is currently in about 5,000 retail stores nationwide, including Wegmans, Whole Foods and Shop Rite. But some other brands with existing supply chain and operations infrastructure have expanded to over 15,000 accounts.

Messersmith added that Oatly was forced to temporarily shutter its direct-to-consumer online business during the out-of-stock period in order to conserve product for its retail partners, but has now reopened its online store and is planning to launch on Amazon.

To coincide with its debut on Amazon, Oatly will begin selling each of its four oat milk SKUs — Original, Barista Blend, Chocolate, and Low Fat — in 11 oz. aseptic packaging. The new format will be available exclusively online only for $14.95 per 4-pack.

“We’ve had amazing partners who have been patient waiting to launch Oatly from when we just didn’t have the readiness to be able to expand,” he said. “Now that we’ve stabilized and built a great foundation with East Coast manufacturing, we plan to open up the West Coast this summer. We’re in a great spot to service those existing partners and now start to add big new exciting partners like Starbucks and others in retail that are coming up.”

After finishing work on its 30,000 sq ft. production facility in Millville, New Jersey last year, this summer Oatly is set to open a second 125,000 sq ft. facility in Ogden, Utah that is roughly the size of its Swedish production plant. He added that the new space, representing an investment of over $40 million, will employ between 75 and 100 people and will allow the company to ensure product quality and reduce lead times for customers in the West Coast and central states.

The added capacity may also finally prompt Oatly to introduce new innovations. While it has limited its U.S. product offerings, the brand markets several dozen products in Sweden and Europe, including flavored milks, ready-to-drink lattes and kids drinks.

“Before when we were having a hard time keeping up with demand on the oat milk itself it was harder for us to rationalize launching the new innovation,” he said. “Now that we’re really good and consistent on the operational foundation, and we’re improving that all the time, it allows us to look at the other categories they have in Europe and think about how to bring them over as soon as we can.”