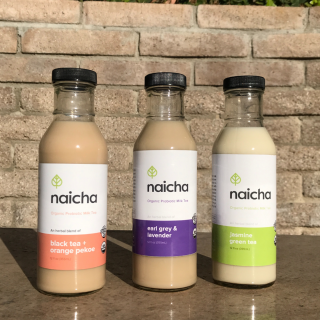 Americans have been increasingly discovering Asian foods, with products such as boba tea, shrimp chips, nori and Lao Gan Ma Sichuan chili oil developing cult-like followings. This inspired a local California producer of Hong Kong-style milk tea to launch a Kickstarter campaign in support of the only shelf-stable bottled and organically-produced milk tea available in the U.S. “Naicha” is the word for “tea with milk” in Chinese and also the company’s name. After being marketed — and almost always sold-out — for several years at farmers markets around the Sacramento, Calif. area, NAICHA is now seeking to broaden its market.

For a $16 pledge, supporters of the NAICHA Kickstarter will receive one bottle of each of the three flavors of NAICHA tea – Black Tea & Orange Pekoe, Jasmine Green Tea, and Earl Gray & Lavender – with shipping included. They’re all brewed using organic loose leaf tea sourced from the origin, along with locally-sourced organic whole milk and natural organic sweeteners. Each 12 oz. bottle contains 130 calories, less than 12 grams of sugar and contains 5 billion CFU probiotics that are clinically studied to aid in digestive health and boost the immune system. In contrast, most other sweetened milk tea drinks on the market are made from concentrated milk tea powder and high fructose corn syrup resulting in over 100 grams of sugar in a 16 oz. container – they’re not much different than drinking a can of soda! The product is shelf stable and can be enjoyed immediately or within nine months of purchase.

Milk tea is itself a cultural fusion. Given that China and most Asian cultures have no tradition of consuming dairy, how did naicha become such a staple of 20th Century Chinese culture? It grew out of the British colonial tradition of afternoon tea with milk. In fact, a Hong Kong restaurant called Lan Fong Yuen specifically claims to have invented the drink in 1952.

The NAICHA tea brand was created in 2017 by Wesley Lin, at the time a 20-year old student at UC Davis majoring in Economics. Unable to find an internship that summer, he began delivering homemade boba milk tea which proved so popular that his delivery route stretched to 25 miles. He soon began making the tea at 2 a.m. on a Saturday morning and going to the farmer’s market at 7 a.m. Like the explosion in popularity of the original milk tea in 1952 which spread from that one Hong Kong restaurant across almost the whole continent of Asia within a decade, Wesley soon found himself selling-out of product at every market he attended.  In 2019, he became the youngest person to be accepted into the Real California Milk Accelerator sponsored by the California Milk Advisory Board to commercially formulate the product.

“By creating a boba alternative and using organic, all natural, and real ingredients in this drink, we advocate drinking healthy and knowing what is in your drink,” said Wesley Lin, founder and CEO of NAICHA Tea. “Not only that, we want to share and connect two cultures with NAICHA. Through the use of premium, organic ingredients acquired locally, we are concocting beverages that are creamy, refreshing, and nourishing to the very last drop.  Join us on our mission to create a healthy and a sustainable world.  With this important fundraiser we will be able to dramatically increase production and develop new flavors such as taro, oolong and matcha.”