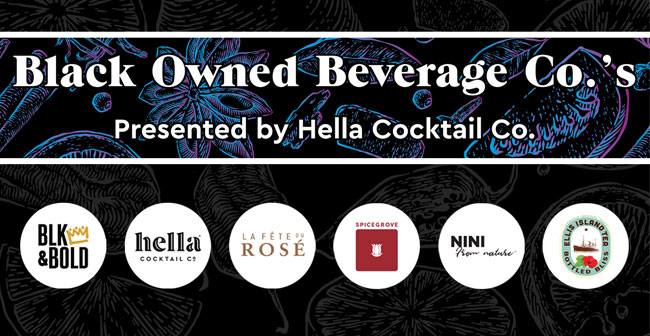 This week during BevNET & NOSH Virtually Live, several food and beverage brands had the opportunity to showcase their companies in a virtual Brand Showcase room, where they could interact with attendees and exchange contact information. But Jomaree Pinkard, co-founder and CEO of Hella Cocktail Co., saw an opportunity to use the online platform to get a vital message out to the industry.

Instead of just promoting his New York-based company, Pinkard invited a handful of Black-owned beverage companies to join Hella at the booth and highlight a community that is often overlooked within the industry. In addition to Hella, the booth featured coffee brand BLK & Bold, winemaker La Fête du Rosé, tea brands Spicegrove and Ellis Island Tea, and tincture and elixir maker NINI Organics.

“This is a community that has no idea who these companies are yet,” Pinkard said. “But Beyonce is actually mentioning one or two of the brands that are in that booth at the same time. And that’s not by happenstance but because they’re known in another community and that lack of access to each other is what we’re trying to solve.”

In addition to hosting the brands virtually, Pinkard also used the platform to release an open letter calling on the industry to go beyond making statements of solidarity with the Black community online and to initiate action plans to diversify the workforce, invest in Black-owned companies and commit to accountability. His statement included five calls to action aimed at all levels of the food and beverage space, from small brands to conglomerates to venture capitalists.

The first step, according to the letter, is to build a continuous diversity evaluation program. Pinkard argued that brands should avoid jargon, such as pronouncements that companies are initiating anti-bias training, which he said does not on its own do enough to break down barriers to entry for BIPOC people (meaning Black, Indigenous and People of Color). He also emphasized that Black and Indigenous communities have often seen the least advancement from movements towards equality within industry, necessitating companies to focus more specifically on improving their hiring and mentorship practices.

“I want to make sure that when I’m talking about BIPOC, it’s clear that even the structure of the acronym is the order of operation,” Pinkard told BevNET. “What’s happened over time is that ‘People of Color’ kind of became synonymous with BIPOC but when you really think about it, Black and indigenous people are where this country was created. And I think they’re still driven to the back of the line.”

Pinkard also advised companies to commit to accountability by increasing transparency and being open about the diversity of their own teams and within their investment portfolios.

Speaking with BevNET, Donae Burston, founder and CEO of La Fête du Rosé, said one thing companies can do to improve diversity is to do more outreach to Black communities through job fairs and other hiring programs.

“Are you going to inner city high schools or historically black colleges and talking about your business as a whole just to create that inspiration?” Burtson said. “A lot of it is just that step alone and getting [young Black people] saying, ‘Hey, I didn’t know there was another career path out here besides a doctor, lawyer, or engineer. There is a beverage industry career.’” 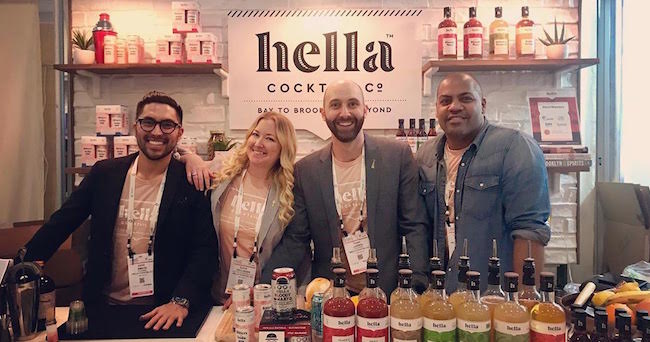 Another important role for companies to play is to “invest their donations” by supporting Black talent within the industry, both financially and through mentorship programs, according to Pinkard’s letter. Though many companies over the past month have given one-time donations to community organizations and groups such as Black Lives Matter, brands and in particular venture capital firms have the power to foment long term change through investing in Black-owned brands and in personnel.

According to Pinkard and Burston, when Black employees are in leadership roles, they often find themselves pigeonholed into positions such as marketing roles focused only on African American community outreach programs.

“[Large companies] are very purposeful in marketing towards [BIPOC] people,” Pinkard said. “The problem is that those kinds of people are not reflected in the business itself.”

Burston, who previously led African American brand outreach at Hennessy, said he was fortunate to have a boss who “refused” to allow him to only focus on a single community and insisted he learn all aspects of the business. He wants to see more companies invest in growing their Black employees’ skill sets so they can continue to move up the ladder.

“Don’t just hire me to work on the sweet drink that you just launched,” Burston said. “Push me and mentor me, and explain that I need to learn every aspect of the business, then hopefully that truck driver will move up and one day can be the actual president of the company. But that doesn’t happen with people of color too often, it happens much more often with white people and men.”

In his letter, Pinkard also challenged VCs and private equity firms to reassess their investment theses and to add more Black-owned businesses to their portfolios. He noted this was a risky statement that may offend potential investors and could turn firms away from finding Black-owned companies. However, he said the disparity and lack of financial support from institutions remains one of the largest challenges Black entrepreneurs have to overcome.

“The main point is the lack of access and that lack of networking and the lack of the investment community to be looking,” he said. “There’s plenty of Black people that have the wherewithal and the ability to be crushing it out here, right? But maybe they don’t have the chance.”

Pinkard said the response to his letter has been overwhelmingly positive. However, he noted that while many individuals enthusiastically shared their support in private, there was hesitance to publicly embrace the sweeping, systemic changes Pinkard is calling for.

Hella co-founder Tobin Ludwig acknowledged the statement was a risk, but also that staying silent was no longer an option, particularly when consumers are making buying decisions based on how individual brands align with their own beliefs.

“Brands now, at least the good ones, are making a choice to take a side and to be vocal and to be an activist,” Ludwig said.

Taste Radio: They’re Obsessed With Helping Consumers ‘Bite’ Better. And This Is Their Plan.