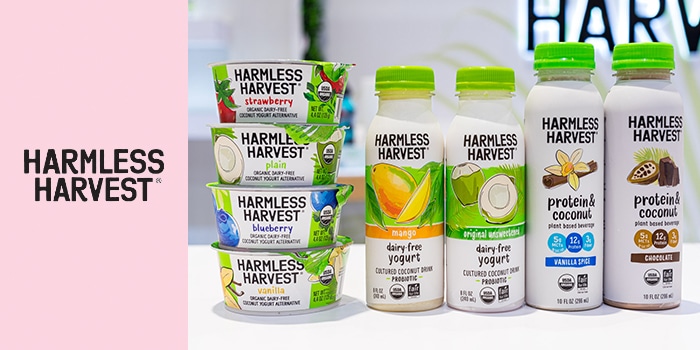 Utilizing the entire coconut to minimize its carbon footprint and maximize profitability has been a long-term goal for Harmless Harvest and its CEO Ben Mand, who joined the company in June 2018. At Winter Fancy Food Show 2020, held January 19-21 in San Francisco, the company unveiled an expanded food and beverage portfolio that delivers on that goal.

Speaking with BevNET at the show, Mand said his “zero waste” directive and focus on new innovations has significantly shifted Harmless Harvest’s reliance on coconut water. Those products, which accounted for 99% of all sales in 2018, now represent roughly 80-90% as of the end of 2019, with the mix expected to continue evolving as the company rolls out more innovations.

“It’s a pretty sizable shift for us,” Mand said. “Coconut water is still going to be the core of what we do, but we think of Harmless Harvest as a premium functional beverage. Hydration is one need state we’re addressing [with the core line], but from a consumer standpoint someone buying Harmless is also buying kombucha, they’re buying protein drinks. Where it makes sense, where we feel there’s a real opportunity to innovate, we’ll definitely do it.”

At the Winter Fancy Food Show, the company, along with a rebranded version of its drinkable yogurt line, introduced its first foray into food: a line of coconut-based yogurt cups. Made from coconut puree, the “spoonable” yogurts are available in Original, Blueberry, Strawberry and Vanilla flavors and retail for $2.29 per 4.4 oz cup.

The origins of the drinkable yogurts, however, lie in the company’s Probiotics smoothie line, launched in 2017. According to Mand, that line has gone through several iterations over the past two years, but the latest version provides consumers with a clearer message. Overall, the product has been simplified: the new version has no added sugars and are now sold in 8 oz. bottles — down from the original 12 oz. size. The price has also been reduced from $4.99 per unit to $2.99.

The drinks are available in Original, Strawberry and Mango varieties. The Original flavor is also available in a 24 oz. multi-serve pack for $6.99.

Harmless Harvest is also shifting its retail strategy, Mand added. The line is moving from beverage to dairy sets in grocery where it can be sold alongside the yogurt cups, giving the company an additional presence within the store.

For its coconut waters, the company has updated its packaging to emphasize the brand name; Previous iterations of the label had identified the product as “Harmless Coconut Water.” According to Mand, while consumers would recognize the brand on sight, many were unaware of the company name.

In addition to its yogurts, Harmless Harvest also launched a coconut-based protein drink line in September. The smoothies contain 12 grams of protein, 5 grams of MCTs and 3 grams of fiber. The line is available in Chocolate, Vanilla Spice and Toasted Coconut flavors and retail for $3.99 per 10 oz. bottle.

The new product lines are currently available in Whole Foods nationwide and will roll out to additional accounts this year. According to Mand, Harmless Harvest currently has between 45-50% all commodity value (ACV) and has focused on expanding its presence in retailers where it is not yet chainwide, such as Kroger, Safeway/Albertsons and Publix. Mand noted that the company is also focused on growing in convenience, as well as independent and food service accounts.

“When you’re in a store like Whole Foods that provides a high density of consumers [looking for better-for-you products], eight out of 10 could potentially be my consumer,” Mand said. “When you get into some mainstream retailers, maybe only one out of 10 or two out of 10 are our consumers. But across the board, all of these retailers are starting to recognize that people are starting to make choices differently and they’re looking for these kinds of products.”

Harmless Harvest is also in the process of finalizing a non-profit to fund sustainable farming initiatives in Thailand, Mand said. A pilot program will work with 10 farmers to test new methods for sustainable agriculture including innovative approaches to beekeeping, yield improvement and composting. As well, Harmless Harvest has also begun processing leftover coconut husks into biofuel, which has created a secondary revenue stream for the company.

“Getting to zero waste has been a massive effort for us, but it’s one that is needed,” he said. “I believe business has a unique ability to have a really positive impact on people and the planet and I do think that business can be a force for good.”