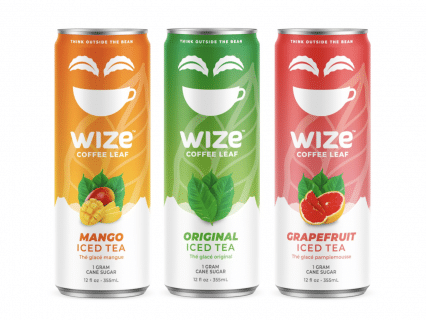 VANCOUVER, B.C.— Wize, the Vancouver founded award-winning brand built on discovering the taste and social impact of the coffee leaf, announced the launch of its canned iced tea line up – the first of its kind now available across North America. The three flavour iced tea line – featuring mango, original and grapefruit – was developed to meet consumers’ demand for a smooth iced tea that kicks high sugar to the curb. Boasting 1 gram of natural cane sugar, 35 mg of light caffeine and an all natural ingredient list, Wize wants to shake up the beverage industry with a well rounded iced tea that doesn’t compromise on taste.

With a vertically integrated model that supports Nicaraguan coffee farmers, the Wize team set out to continue its social impact with its line extension; each can sold generates 2 minutes of employment to Wize’s coffee farmers.

“The coffee crisis has been worsening for decades, and now with COVID peaking in Latin America, it’s getting even harder to survive in this industry. Half of the coffee farmers in our region are planning on migrating elsewhere and abandoning their crops because there are no other options. Thankfully, with our innovation, we can make Coffee Leaf Tea in the off-season, and it helps keep people employed at a safe distance outdoors,” shares Enrique Ferrufino, Wize Co-founder and farmer.

The Wize Iced Tea line up – available in a 12 Discovery Pack and 24 Canned Pack – includes:

Ready to crack open a refreshing Wize Iced Tea? Wize Iced Tea is now proudly available on Wize’s website, Amazon US, and more Vancouver retailers coming on board each week.

Wize was built off a big mission: to create a world-class beverage brand by innovating the coffee leaf and stabilizing the coffee industry for long-term socio-economic growth. Wize was launched in November 2014, and since, has won Best New Product at the 2015 World Tea Expo and attracted worldwide press for its focus on its hero ingredient for social impact and change – the coffee leaf. With the local crowd picking up and customers coming from over 35 countries, the founders are proud to call Vancouver home. Want to learn more? Follow along on Instagram and visit https://drinkwize.com