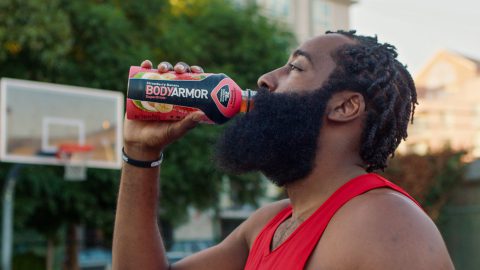 This campaign focuses on the hard work, drive, and determination that so many athletes put in behind-the-scenes, whether it’s one more rep, one more drill or even one more hour on the practice field after everyone else has gone home. From star players to backyard athletes having fun, it’s the hunger to be better and out-work the competition that pushes us to be the best, and BODYARMOR Sports Drink is there to hydrate everyone’s efforts.

“Taking your game to the next level means committing to your craft, and that’s where those extra hours and late nights on the court come in,” said basketball star, James Harden. “It’s the time that you put in when no one is watching that will make a difference down the road. I’ve been part of Team BODYARMOR for 6+ years now and they share that same mentality. We put in the work behind the scenes so that when the time comes, we’re able to reach our full potential – for us that means being the best.”

“’One More’ is all about pushing yourself to be better than you were yesterday,” said world class tennis player, Naomi Osaka. “BODYARMOR is unrelenting in their pursuit to be the #1 sports drink by 2025. We share that same mentality, that drive and hunger for more.”

“One More” is BODYARMOR’s largest multi-faceted campaign ever consisting of television, digital creative, out-of-home, radio, and social executions. It debuts on national broadcast with a spot during round one of the 2021 NFL Draft. The campaign comes at a pivotal time for the brand as BODYARMOR continues to grow and redefine the $40 billion active hydration category. Now the #2 sports drink nationwide, BODYARMOR has incredible momentum at retail and has generated more than $1 billion in yearly retail sales.

“BODYARMOR’s new campaign highlights the hard work and determination that goes in behind-the-scenes to be your best, whether you’re training to be a pro or practicing in your backyard.”  said Michael Fedele, VP of Marketing at BODYARMOR. “Our athlete investors take that to heart – and are not only dedicated to their sport – but are also uniquely committed to making BODYARMOR the #1 sports drink for generations to come.”