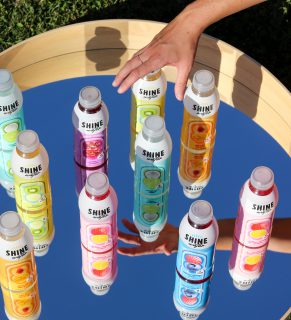 Sales acceleration and distribution growth are fueling team expansion at ShineWater. They recently announced the hiring of Ryan Coon as their Chief Marketing Officer and Cheri Thompson as their VP of National Accounts. These two key executive positions will help support their growth strategies and retail expansion in the coming years.

Before joining the team at the new enhanced water brand, Ryan Coon spent over 24 years in the beverage marketing industry setting strategies and launching new brands around the world. Most notably Coon served as a VP, Global Director for Glaceau’s Vitaminwater and Smartwater (later acquired by Coca-Cola Company). Following his transition time with Coke, Coon then went on to build a consulting practice where he served as an advisor to a long list of brands such as Pretzel Crisps, Krave Jerky, Flatout Flatbread, and Vital Proteins through their growth and acquisition phases.

“With almost half of the US population facing a vitamin D deficiency, I immediately saw an opportunity with ShineWater to bring “Sunshine in a Bottle” to the consumer and solve a major nutrient problem around the world. Joining the ShineWater team as Chief Marketing Officer allows me the opportunity to work hands-on in every aspect of building the brand. Vitamin D has such a critical role in maintaining a healthy body and immune system that consumers are just now beginning to grasp. As people consume less vitamin D fortified foods like milk and cereal and they use more sunscreen that blocks vitamin D absorption from the sun, the opportunity for ShineWater to bring Vitamin D back into peoples’ diets will only continue to grow in importance,” Coon said.

Cheri Thompson joined ShineWater with over 10 years of experience in the beverage industry working with companies such as Big Red, Steaz, Novamex, and New Age.

“I enjoy the challenges and hurdles that come with start-ups and being able to see the fruits of your labor come to fruition is extremely rewarding,” said Thompson. “I look forward to bringing on all of the national accounts and helping to build the remainder of the DSD network.”

In addition to Coon and Thompson, the ShineWater Sales Division has added an additional 9 positions to support their rapidly expanding distribution. Brad Lyle, National Sales Director, leads the team in the Western U.S. Regional Account Managers Ally Hotze, Michelle Politoski, Brent Osborn, and Marie Taylor have joined to build out the sales team and Regional Brand Managers Lawrence Derocher, Brianne Hubbard Ross, Katelyn Sparkman, and Bart Steinke have joined to expand local sales and marketing efforts.  More growth is on tap for 2021 as more distributors come on board in the Western U.S.

“Bringing on more team members is a key step forward in our evolution as the fastest growing enhanced water company in the U.S.,” said owner Rod Hildebrant. “We are thrilled to add all of our new team members’ beverage experience and talents that will drive growth for our brand.”

ShineWater’s team is working like mad to get product coverage nationwide. Interested in selling or distributing ShineWater?  Call the team at 989-891-6513 or email ShineOn@shinewater.com