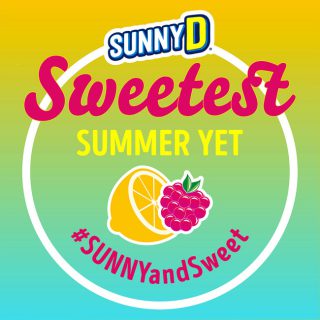 STAMFORD, Conn. – 2020 was a lemon of a year, which is why SUNNYD is determined to make summer ’21 the sweetest yet for Gen Z, with an added twist. For a limited-time only this month, the boldly original beverage brand owned by Harvest Hill Beverage Company, is debuting two new flavors suited for the season with classic Lemonade and new Raspberry Lemonade. And the fun doesn’t stop there – SUNNYD has teamed up with teen music sensation, Johnny Orlando, to host its Sweetest Summer Yet TikTok Hashtag Challenge and Contest, giving fans the chance to win a private virtual concert with the singer during the SUNNY-est season of the year.

SUNNYD’s Sweetest Summer Yet TikTok Hashtag Challenge and Contest asks fans to show how they’re going to make this summer the sweetest yet using #SUNNYandSweet. Whether it is mastering a new sports skill, picking up a long put-off hobby or hanging by the pool, eligible participants are encouraged to get involved and get creative. One grand prize winner will win a private virtual concert with Johnny Orlando and up to 50 of their friends, a SUNNYD summer swag pack and summertime supply of the sunny, sweet beverage. Ten first prize winners will also win the swag pack and summertime supply of SUNNYD.

“I grew up drinking SUNNYD as a kid, which is why I’m so excited to partner with the brand to announce the new lemonade flavors and bring fans the sweetest summer yet,” said Johnny Orlando. “Everyone could use a little sweetness this year more than ever, so I’m looking forward to meeting the one lucky winner and their friends during a private virtual concert later this summer.”

A bold, refreshing take on a classic summertime staple, SUNNYD’s fan-favorite Lemonade is returning to grocery shelves for a third consecutive summer after nearly selling out in years past. Raspberry Lemonade is making its debut as a new twist on the popular tangy-but-sweet lemon sip. Both flavors are available while supplies last at retailers nationwide such as WinCo, Food Giant and Hy-Vee in 64-oz. multi-serve carafes. Like other SUNNYD flavors, Lemonade and Raspberry Lemonade are packed with 100% Vitamin C and contain only 60 calories per eight-ounce serving.

“Our limited edition summer flavors have consistently been a big hit with Gen Z, and doubling down on two lemonade options that are synonymous with summer adds a special excitement for the season,” said Ilene Bergenfeld, Chief Marketing Officer of Harvest Hill Beverage Company. “We’re excited to make a splashy return nationwide and connect even more with our Gen Z audience by having Johnny Orlando on board. With a loyal following of millions of teens, we can’t think of anyone better to help kick off the sweetest summer yet.”

Fans can participate in SUNNYD’s Sweetest Summer Yet TikTok Challenge and Contest by creating a 15 – 45 second video using the hashtags #SUNNYandSweet and #contest and following SUNNYD’s official TikTok. The SUNNYD Sweetest Summer Yet TikTok Challenge is open now and ends at 11:59 PM ET on 6/7/21. Open to legal residents of the 50 U.S./D.C. who are 13 to 22 years of age (with parent/legal guardian permission where applicable) as of the date and time of entry. Void where prohibited. Standard data fees/rates may apply.

Harvest Hill Beverage Company, based in Stamford, CT, is owned by private equity firm Brynwood Partners, and acquired the SUNNYD brand from J.W. Childs in February 2016. Harvest Hill markets some of America’s most beloved beverage brands, including SUNNYD, JUICY JUICE, LITTLE HUG, and DAILY’S Cocktails. SUNNYD products are widely distributed through leading retailers in the U.S., Canada, and Mexico.