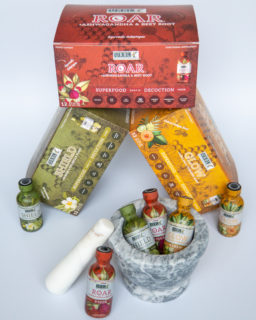 URBL, a Canada-based functional botanical beverage shots brand, is officially launching in the U.S. on Sep 23 via their first in-person trade show at the Natural Products Expo East in Philadelphia.

The brand, founded in Canada at the start of 2021, has established a presence in its home market with availability at several independent as well as premium supermarkets in the Canadian market such as Sobeys, Organic Garage, Natures Fare, and Ambrosia. URBL is partnered with UNFI Canada for its nationwide distribution.

The current line of products includes “URBL ROAR,” featuring ashwagandha, one of the most potent Ayurvedic adaptogens, to help consumers adapt to a variety of physical and psychological stressors; “URBL SHIELD,” a memory boosting and liver protecting shot with bacopa monnieri and milk thistle as the key botanicals; and “URBL GLOW,” a collagen booster made with amalaki and turmeric root, providing antioxidants and collagen-boosting benefits.

URBL has particularly ambitious plans for the U.S. The brand was launched online via direct-to-consumer ecommerce platform urblicious.com and on amazon.com at the end of July. Now, the brand is looking to officially launch in the retail market through its first in-person trade show in Philadelphia. Stop by booth #2039 at the NPEE trade show.

In the U.S. market, URBL will retail its entire line of products for $3.99 per 2oz shot serving or $47.88 for a 12-pack. URBL is also offering a new variety-pack in the U.S. online market, providing customers a chance to try all 3 products. The U.S. line is locally produced in a state-of-the-art GMP (Good Manufacturing Practices) and NSF certified facility.

“Unlike sugar-rich, high-fructose fruit juice shots with excessive amounts of ginger and pepper added only to overemphasize effectiveness, URBL is a botanical nutraceutical packed with 24 varying superfoods to boost your physical as well as mental health – a comprehensive immune support,” said Suhas Verma, the founder and CEO of URBL. “We are very excited to introduce our products to the U.S. consumers and hope they will appreciate URBL’s unique offering of medicinal ingredients in a fun beverage form,” Verma said.