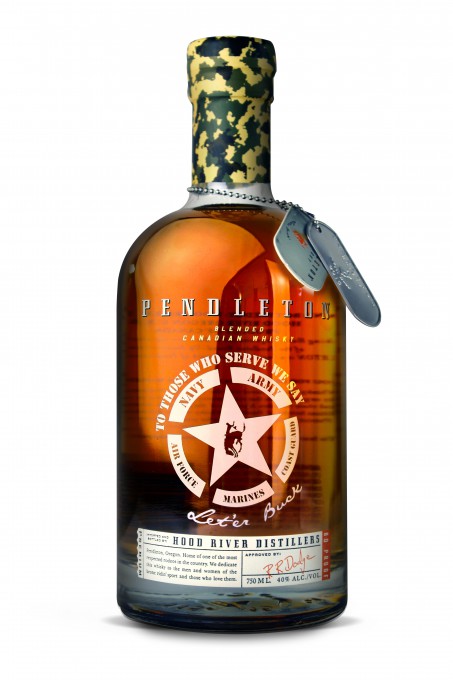 A portion of the proceeds from the sale of each 2015 Limited Edition will be donated to the Wrangler® National Patriot™ program.

HOOD RIVER, Ore. (April 8, 2015) – Hood River Distillers, Inc., the largest and oldest importer, distiller, producer and bottler of distilled spirits in the Northwest, today announces a limited edition bottle for Pendleton® Whisky that honors the integrity and patriotism of those who serve, and have served, our country with pride.

A portion of the proceeds from the sale of each Pendleton Whisky limited edition bottle will be donated to the Wrangler® National Patriot™ program to make a difference in the lives of active military personnel and veterans throughout the country.

“It is with this limited edition bottle of Pendleton Whisky that we raise a glass and proudly salute the honorable men and women, and their families, who have dedicated their lives to the American people by serving in the United States military,” said Tia Bledsoe, Senior Brand Manager, Hood River Distillers. “We have a high degree of admiration for our service members – past and present – and look forward to partnering with the Wrangler National Patriot program on this meaningful endeavor.”

Founded in 2009, the Wrangler National Patriot program is designed to raise awareness and funds for wounded or fallen American military veterans and their families by uniting the rodeo and western communities in fundraising efforts.

The Pendleton Whisky 2015 limited edition bottle will be available at spirits retailers throughout the country beginning May 2015 with a suggested retail price of $26.95 (750 ml). Additionally, the Pendleton Whisky limited edition bottle was designed by Owens-Illinois, Inc. (O-I), the world’s largest glass container manufacturer, with bottle art designed by French/West/Vaughan.

“Pendleton Whisky has always been a friend of the Wrangler National Patriot program, and we are excited to now announce this formal partnership,” said Jeff Chadwick, director of special events for Wrangler Western Wear. “The Pendleton Whisky 2015 limited edition bottle further enforces the combined dedication from both organizations to patriotism nationwide.”

For more information about how to purchase this limited edition bottle, or Pendleton Whisky’s engagement with the Wrangler National Patriot program, please visit www.pendletonwhisky.com. For more news from Pendleton Whisky, visit the brand on Facebook, Twitter or Instagram.

Pendleton® Whisky is imported, bottled and marketed by Hood River Distillers of Hood River, Ore., and is available nationwide. The oak barrel-aged whisky uses glacier-fed spring water from Oregon’s Mt. Hood and is known for its uncommonly smooth taste and rich, complex flavor. Pendleton Whisky is the official spirit of the Professional Rodeo Cowboys Association (PRCA), and the presenting sponsor of the All American ProRodeo Series, which includes 400-plus PRCA rodeos.

Founded in 2009, the Wrangler National Patriot program is a year-round campaign developed to help raise awareness and funds to support American military veterans and their families and to serve as inspiration for all Americans to rally around each other in patriotism. A portion of all Wrangler National Patriot apparel proceeds also benefit this cause. For more information, visit www.wranglernationalpatriot.com.

Owens-Illinois, Inc. (NYSE: OI) is the world’s largest glass container manufacturer and preferred partner for many of the world’s leading food and beverage brands. The Company had revenues of $6.8 billion in 2014 and employs approximately 21,100 people at 75 plants in 21 countries. With global headquarters in Perrysburg, Ohio, USA, O-I delivers safe, sustainable, pure, iconic brand-building glass packaging to a growing global marketplace. For more information, visit o-i.com