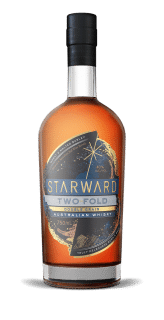 MELBOURNE, Australia– Starward Australian Whisky officially announces the distribution of their double grain whisky in the U.S. Capturing the best of Australia, Starward Two-Fold Double Grain Whisky brings together two quintessential Australian grains in the bottle: wheat (60%) and malt (40%) from their Double Gold winning Nova Single Malt, which are distilled and fully matured separately in the distillery’s signature red wine barrels from some of Australia’s leading wineries. The result is a deliciously approachable and full-flavored new world whisky.

Starward Two-Fold was designed to be the ideal tasting whisky: malted barley gives it depth; wheat provides an aromatic and dry note; and in order to give it the full, delicious fruit and spice flavors for which Starward is known, the spirit is matured in its signature red wine barrels.

“When I envisioned Two-Fold, I was inspired by Melbourne’s world class foodie scene,” said David Vitale, Founder of Starward Whisky. “We’re obsessed with excellence in all types of food and drink without getting too serious or formal about it. I wanted to create a whisky for us to enjoy and celebrate alongside our world-class craft beers, wines and amazing food. We found that wheat and malted barley create the perfect backdrop for our red wine barrels to shine both as a neat and easy drinking whisky but also mixed, in a cocktail or at the barbie – we are Australian after all!”

Two-Fold is proudly versatile. Suggested servings include a highball with soda for the aromatic spicy character to come through; a Boulevardier will bring out the baking spices; and a Two-Fold and Tonic will make one  start to wonder why they need gin in life.

Two-Fold originally launched in Australia in 2018 and since then has been awarded 85 points by The Ultimate Spirits Challenge for its “seductive aromas” and a World Whisky Award as Australia’s Best Blended Whisky.

Starward Two-Fold Double Grain Whisky has an ABV of 40% and is available nationally for the suggested retail price of $32.99 per 750ml bottle. For more information on Starward visit starward.com.au and on Facebook, Twitter and Instagram at @StarwardWhisky.

Starward was founded by David Vitale in 2007 in Melbourne, Australia and is a modern Australian whisky, elementally matured in Australian red wine barrels, pushing the boundaries of what whisky can be. The core ethos is built on the foundation of an approachable whisky fusing old and new. Old World – traditional product and stills, new world – maturation methods and attitude. The ingredients used to distill Starward are a day’s drive away from the Melbourne-based distillery. The red wine barrels that mature the whisky are built around a broad cross section of big Australian reds, with the keystone being 100L Barossa Shiraz barrels. Using a minimal intervention approach, the whisky gets the best flavor results and the quick turnaround time between the barrels being disgorged at the winery and arriving at Starward means that the barrels retain much of their original character that is apparent in the flavor and texture of the whisky.

Since its Australian debut in 2016, Starward Nova has received numerous accolades including two gold medals at the 2016 San Francisco World Spirits Competition for both the “World’s Best Craft Distilled Whisky” and the “Best Australian Single Malt Whisky”. Starward was also recently named “Best Australian Whisky Innovator” from Icons of Whisky and crowned “Best Australian Single Malt” by the World Whiskies Awards in 2016 and 2017. Starward currently has two expressions available in the United States: Nova Single Malt Whisky and Two-Fold Double Grain Whisky. For more information on Starward visit starward.com.au and on Facebook, Twitter and Instagram at @StarwardWhisky.