Merlo, of Oregon, was the majority owner of Portland Bottling Co. for 14 years. It was important to Merlo that
the business be transitioned to a local buyer who would retain the employees, culture and “can do” attitude
that made Portland Bottling Co. successful. The Company was founded in 1924 by Andrew Hrestu, a Greek
immigrant, and was operated by Hrestu and his descendants, including the Rouches family, until they sold in 1990.

All 90 employees will remain with the Company, which operates from the 171,000 SF building at 1321 NE
Couch St. The iconic building, visible from NE Sandy, was constructed by Hrestu and became Portland
Bottling Co.’s headquarters in 1941. Employee dedication, hard work and innovation are credited with
sustaining and growing the Company over the past 92 years.

“Portland Bottling is just as relevant to consumers in 2016 as it was to the same consumer decades ago. That
longevity made it compelling to us,” said Ed Maletis. “From the popularization of 7-Up after World War II, the Cola Wars of the 80s and 90s, into major shifts in taste of carbonated beverages later, Portland Bottling has always found a way to remain relevant to evolving consumer demands. We are very excited to build the future of the Company upon the legacy of the Hrestus, the Rouches, and Harry for generations to come.” 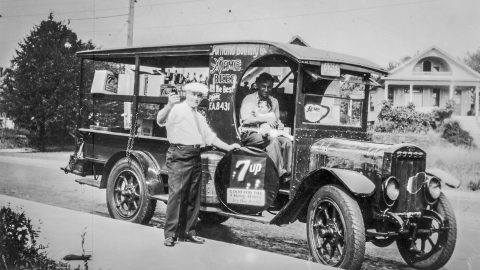 Terry Michaelson, the former CEO of Craft Brew Alliance, has been named CEO of Portland Bottling Co., and
has invested in the company. He will focus on company growth in his role. Tom Keenan, who joined the
business in 2002 when Merlo and other investors purchased it, will remain president, and continue his
focus on current business operations. Maletis and his family will guide Portland Bottling Co.’s long-term
ownership.

“This is a very good day for our team because it was important to Harry that we remain local,” said Keenan.
“We will miss Harry’s influence, but it’s easy to welcome someone familiar to us in Ed, who is like-minded in
terms of our employee commitments, product quality, customer service and dedication to the region. We are
very proud to be able to carry on the legacy that has been created, and to be stewards in developing a
Company that can celebrate another 100 years of local ownership.”

Maletis’ grandfather, Chris Maletis Sr., founded Columbia Distributing in Portland in 1935 and shared his Greek heritage with Mr. Hrestu. Both men were born in the late-1800s in the tiny village of Limnes, Greece, near the coast. Their common ancestry, and story of immigration to Portland from Greece as young men, was a factor in the family’s interest in the company.

Beginning in 1976, Maletis worked alongside his parents, Chris Jr. and Cleo, and brothers, Chris, Tom and Rob at Columbia Distributing. He became president and CEO in 1993, and guided the company through
several important acquisitions from 1993 to 2006. In 2008, Maletis led the consolidation of Columbia
Distributing with Mt. Hood Beverage and Gold River Distributing to create one of the largest diversified
beverage distributors in the U.S. He sold the company in 2012. Portland Bottling joins other Oregon-based
holdings of the Ed Maletis family, including Oregon Fruit Products and HealthCo Information Systems.

David Alexander of Macadam Capital Partners represented the sellers of Portland Bottling Co. in the
transaction. Founded in 1993, Macadam is a private investment banking and consulting firm providing services to Northwest based middle market companies.

Portland Bottling Co. is a non-alcoholic beverage industry co-packer, manufacturing and canning drinks on
contract for its partner brands. Its portfolio today includes nearly 125 products like Monster, Rockstar, Izze,
Dutch Bros.’ Rebel and more, which are distributed primarily in the Western U.S. and Asia. The Portland
Bottling team is committed to providing complete customer satisfaction while achieving superior results in
safety, quality, and service. It was an early adopter of the Global Food Safety Initiative (GFSI) standards, and
regularly achieves exceptionally high marks from AIB International, the independent GFSI auditor, and the FDA for its food safety practices. Since 1941, the Company has been located at Northeast Sandy Boulevard and 12th Avenue in Portland. Portland Bottling Co. and its employees participate in and financially support various charitable organizations and local community activities. It can be found online at www.portlandbottling.com.