by Hain Celestial Group, The

BluePrint, which was a pioneer of the cold-pressed juice category, has launched its first significant line extension since the brand’s inception and later purchase by Hain Celestial. Like much of BluePrint’s high pressure processed (HPP) competition, this is an offering that’s geared towards conventional channels rather than natural.

The update feels long overdue; BluePrint’s competition has been much more aggressive with line extensions and new flavor and package formats. However, what BluePrint has created is something that’s very on-trend and current, starting with the smallish 10 oz. format and $3.99 SRP. While the package still mentions that it uses cold-pressed juice, mentions of “raw” and HPP have been removed from the bottle. The company’s idea is that a renewed emphasis on “Organic” is really what’s going to win consumers over. This seems like a logical move and one that improves the approachability of the brand. 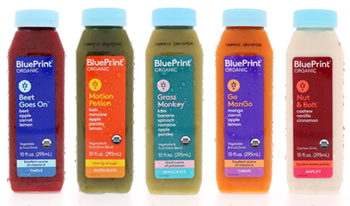 Inside the bottle, the line extensions move away from the juice cleanse category that built the BluePrint brand and focuses on flavors that are mainstream while remaining relatively calorie conscious. Perhaps the most noticeable change is that these products aren’t 100 percent juice, but rather range from 67-86 percent. This not only helps with the calories, sugar, and price point, but it also makes for flavors that are less intense than what you’ll find in BluePrint’s flagship line.

As for the flavor lineup, BluePrint has definitely created some nice tasting products. Here’s a rundown of the initial five flavors that we sampled:

Branding and packaging are a step above what we’ve seen from BluePrint in the past. While the brand has had a hard time distinguishing the flavors in its flagship line, this line’s varieties are easy to identify. They're colorful, approachable, and appealing to the senses, which is always a good thing for any beverage line.

Still, we wonder if there isn’t some brand equity that’s been lost. We say this both because of the amount of time that BluePrint has taken producing this line (plenty of new brands have launched and its competitors have been cranking out new products) and in the sharp contrast of looks from the minimalist style of the other products.  To help with the latter part, there are some elements on the label that could be modified or eliminated to bring it slightly closer to their other products. Specifically, the text below the package size text seems to be a bit much, with the exception of the callout for sugar content (but we’d move that somewhere else).

Overall, we like the concept and the execution of this product. It feels like the right step for this brand, although we really wish the company had created this a bit sooner than Spring 2016.