Blume Slow Brew is a four flavor line of USDA certified organic beverages that are made with brewed Ceylon cinnamon instead of tea or a more traditional herbal tea base. While we’ve seen brewed cinnamon beverages before, this is the first time that we’ve seen an entire line dedicated to it. 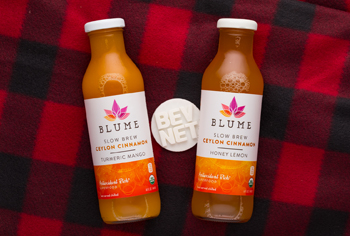 The four flavors include an unsweetened (simply called Unsweetened), one that’s sweetened with honey (Honey Lemon), and two that are sweetened with sugar (Turmeric Mango and Hibiscus). Even the sweetened flavors are quite light and top out at 9 grams of sugar and 35 calories per bottle.

While you can’t miss the cinnamon flavor in any of the four varieties, it offers a mellow rather than assertive spice and it’s a pretty nice substitute for a mild black tea. The Unsweetened SKU is a great starting point as it is flavored exclusively with cinnamon and is the best showcase for the base flavor.

However, Honey Lemon and Turmeric Mango were our two favorites of the bunch. Both have a potent dose of cinnamon flavor, mild sweetness, and fruit to round it out. Lastly, there’s Hibiscus, which is a good choice if you prefer something sweet but without fruit flavor. Of all the varieties, this is the most similar to traditional herbal tea.

As far as the packaging goes, we think Blume has done a nice job of giving this product a vibrant and clean appearance. The brand uses a 14 ounce glass bottle with a label that’s white on the top and has an accent color band along the bottom third. We found the logo polished and the name inviting.

However, there’s a lot going on in terms of the label copy ;as a result, we feel as though some focus and simplification might be in order. Specifically, if one were to look at this quickly it could be mistaken for a cinnamon flavored tea rather than brewed cinnamon. Furthermore, the callout for antioxidants and the reference to cinnamon as a “superfood” are, in our opinion, largely just category noise and something that doesn’t need to be as prominent.

In the end, Blume Slow Brew Ceylon Cinnamon is an enjoyable and unique riff on herbal tea. While we think that there’s a need to refine and dial in the messaging on the label, this is a solid first effort that the brand can definitely use to get its foot in the door.