Brooklyn Crafted is a company that got its start as a producer of top notch ginger beers. Recently, the company has expanded into herbal teas, cinnamon drinks, and now this latest line, Calamansi-Ade.

As the company’s website states, calamansi is a kumquat-mandarin orange hybrid that hails from Southeast Asia. It’s used in a handful of RTD beverages and is still something that doesn’t have a ton of awareness in the U.S. marketplace. However, we do think that its tart and sweet flavor is something that should be easy for consumers to pick up and enjoy. 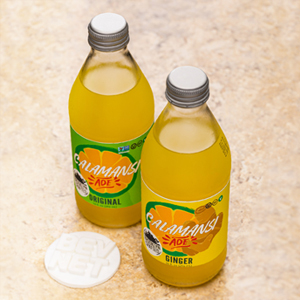 Right out of the gate, the Lite Original variety, which is sweetened with stevia, was our least favorite. While it has only 10 calories and 2 grams of sugar per 10 oz. bottle, the flavor of the stevia was just too harsh and it doesn’t really pair well with the calamansi. Plus, the visual execution of “Lite” is such that we found it easy to miss. This one unfortunately needs to go back to the drawing board.

Fortunately, the other three flavors that we sampled were quite delightful. The Original variety is flavorful, refreshing, and, thanks to a four ingredient formulation (water, calamansi juice, sugar, and ascorbic acid), really clean tasting. It has 70 calories and 19 grams of sugar, which gives it a modest amount of sweetness but it’s still far from being too much or simply tasting like straight juice.

Mango, which adds both mango juice and natural flavors, is the fullest bodied of the flavors that we sampled. While the flavors work well together, we think it is just a bit too sweet tasting.

Finally, there’s Ginger, which was our favorite flavor of the bunch. It features brewed ginger as an ingredient, which is not only a nice tie back Brooklyn Crafted’s flagship product line but it also creates a flavor pairing of sweet and spice that works really well.

Visually, the product has a bright and modern appearance. The label features a colorful scheme where each flavor gets its own background color and fruit illustration, with an illustration of a calamansi slice being a constant. “Calamansi” is stacked on top of “Ade” to create the logo, while a Brooklyn Crafted logo sits in a white circle off to the bottom left. We think they could probably tie them together a bit better for readability sake, but it’s pretty close to where it needs to be.

Overall, calamansi still has a long way to go before it becomes a beverage trend, but we think that Brooklyn Crafted’s Calamansi-Ade is a product that should help it step closer.