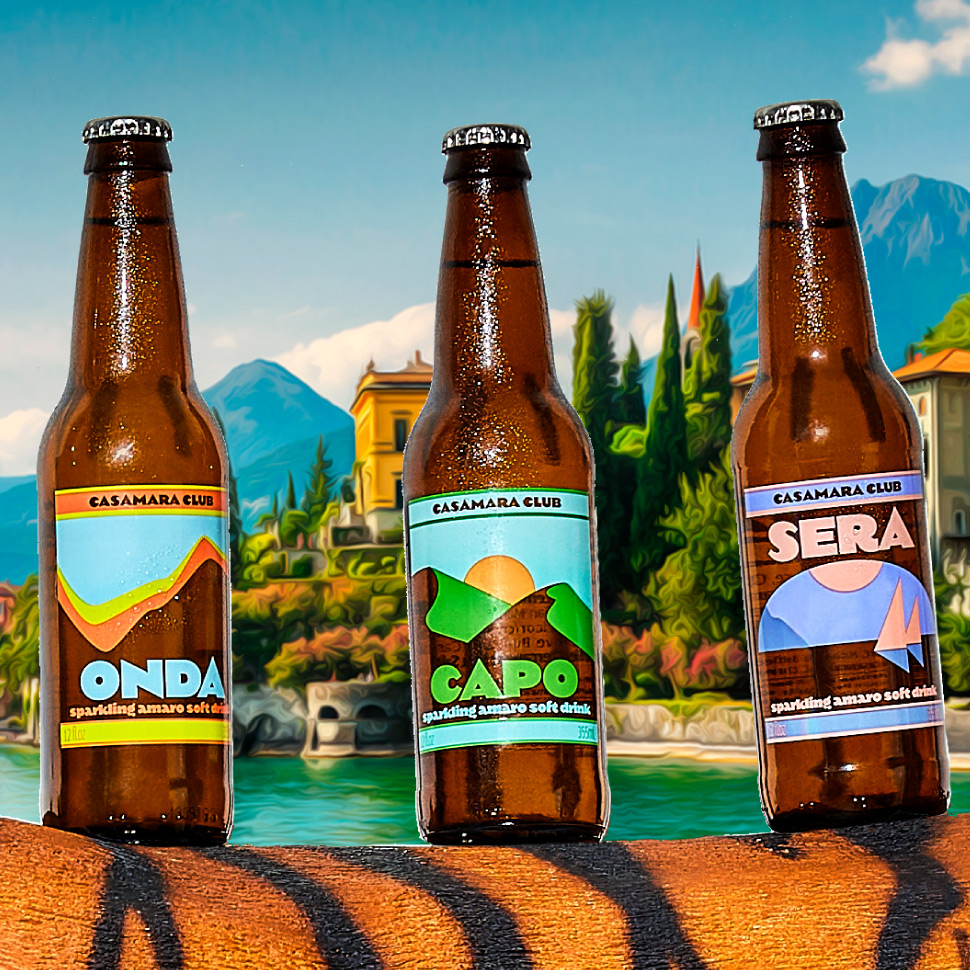 Casamara Club is a line of non-alcoholic carbonated soft drinks that were inspired by the flavor of amaros and aperitivos. The line, which launched in late 2018,currently includes four flavors: Sera, Capo, Onda, and Alta. All four SKUs have 15 calories and 4 grams of sugar per 12 ounce bottle.

From a taste perspective, the four products share a similar base flavor. They are light, crisp, and have a bitterness to them that is definitely reminiscent of what you’ll find in most amaros, thanks to Casamara Club’s use of high quality ingredients. This includes things like chinotto extract (an Italian citrus), juniper berry, clove, rhubarb root, licorice root and others.

To add sweetness, two of the SKUs (Onda and Alta) use demerara sugar syrup while the other two (Sera and Capo) use honey. In both cases, it’s a subtle level of sweetness that really just helps to cut the bitterness of the drink. Again, this is somewhat similar to an amaro and we like how they’ve carried this theme throughout.

While all four taste good, we worry that they are a bit too similar to one another for the average consumer to notice and appreciate the differences. That said, our favorites were the Alta, which has an almost gin-like flavor from the added chinotto, juniper, clove, and aniseed, and Sera, which has a bright flavor profile from added lemon, orange blossom, honey, chinotto, and grapefruit. We definitely appreciate the touch of salt -- it’s a nice finishing note.

On the outside, Casamara club’s packaging has an aesthetic that we’d describe as retro but also sophisticated and minimalist. The front panel features a somewhat small callout for the brand name followed by a center section that features a large callout for the name of the flavor and a slightly abstract illustration of a landscape. Lastly, there’s a single line of descriptive text: “sparkling amaro soft drink.”

While we really like the overall look of the product, it seems as though they might need a bit more to communicate what’s inside the bottle. A sparkling amaro soft drink is a new thing and we think they’ll need to say a bit more to create appeal beyond those who are already familiar with the drink.

In addition, we think that they need to do more to communicate the differences between the flavors. The names are conceptual rather than specific and the consumer will have to turn to the back panel and read the ingredients list to figure out more about what’s in each drink.

One final note on the packaging: on the company’s website they appear to be offering some SKUs in a can (as well as the 12 oz glass). Moving to a can would also probably help this brand, both in terms of its perceived value/use and operational benefits for DTC in that they’ll avoid breakage. We’d love to see this be the direction they go.

In the end, there’s definitely some room for improvements to the product’s label messaging and how it communicates itself and that seems to be the obvious place that the brand should work on improvements. But what Casamara Club has created with the liquid is spot on in terms of flavor, uniqueness, and being on trend both as a low sugar/calorie CSD and as a replacement for alcohol.