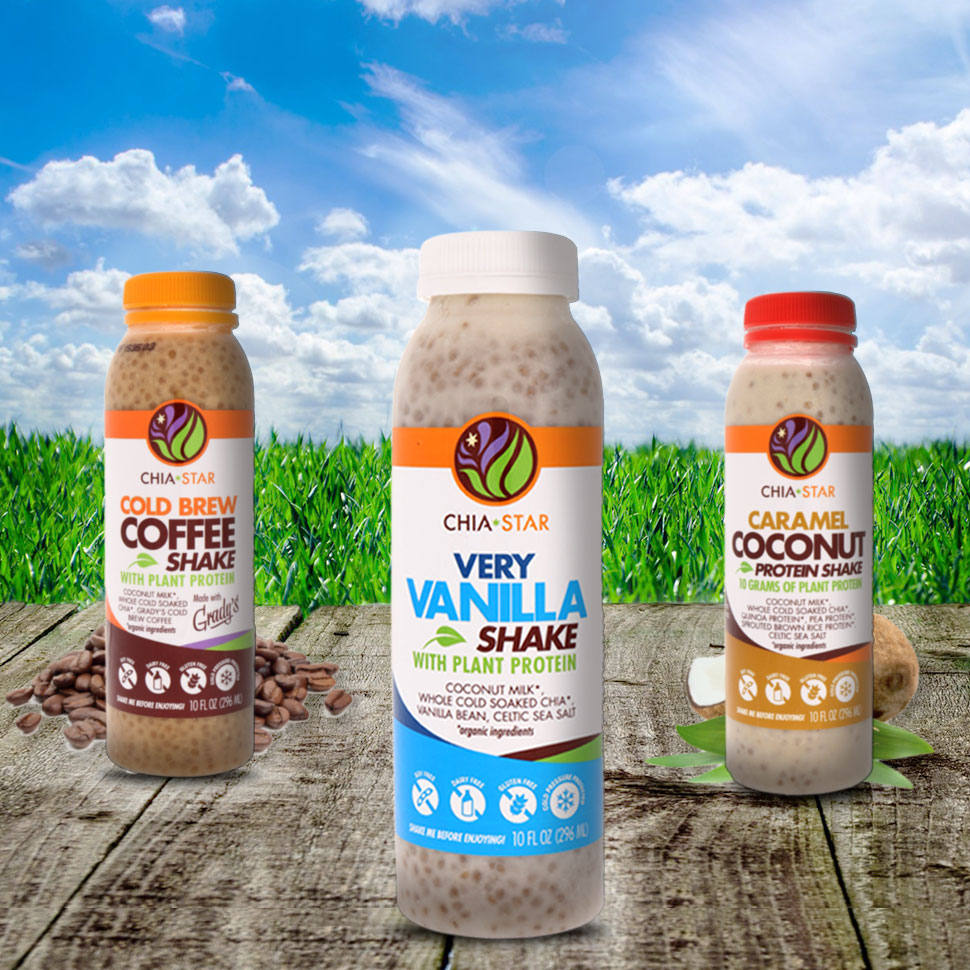 Chia-Star’s “Shake” is a line of plant protein based smoothies that comes in three flavors: Very Vanilla, Cold Brew Coffee, and Caramel Coconut.  Unlike the company’s core line, comprised of juice-based and pasteurized offerings, the Shake line is high pressure processed (HPP) and uses coconut milk as its base.

Having a focus on plant-based protein, a trend that is rapidly gaining critical mass in both food and beverage, is certainly a timely move for Chia-Star. The line’s entry level and more mainstream offerings, Very Vanilla and Cold Brew Coffee,  have a modest 4g of protein, derived solely from the chia and coconut milk. The Caramel Coconut, which has added quinoa protein, pea protein, and sprouted brown rice protein, clocks in at 10g of protein per bottle.

However, this is all moot if it doesn’t taste good. Fortunately they’ve done a really nice job with the product’s flavor as well and, even if you don’t care about protein, they are enjoyable. All three have a creamy base and a mellow coconut flavor, which is immediately followed by some chew from the soaked chia seeds. As far as the flavors go, the Very Vanilla and Cold Brew Coffee flavors were, thanks to their clean and simplistic flavor profiles, our favorites of the three. Vanilla bean and sea salt make for  a subtle flavor that’s quite addicting, while the Cold Brew Coffee flavor, which is a bit fuller in body than Very Vanilla, is flavored with Grady’s Cold Brew Coffee. We could certainly tolerate a bit more coffee flavor, but it’s quite balanced the way that it is. Lastly, there’s the Caramel Coconut, which, with its added ingredients, tastes as close to a protein drink as you’ll find in this product line. It’s great to see the additional protein in this product, but the caramel flavoring tastes like it  could use some improvement.

Packaging is a 10 oz. cylindrical bottle, which is a very common shape in the HPP beverage category. The label design is busy and cluttered and this is definitely our least favorite part about the product. We think there’s some good design equity in the Chia Star logo, but there’s way too much stuff on the front of the label. The front ingredient list as well as the lower icons, which denote their soy-free, dairy-free, gluten-free, and cold pressure processed formulation, are hard to quickly read. Coming up with a cleaner format, or moving them to the back, would be a big help.

Also, there’s some inconsistency with the label copy that could be cleaned up on the Caramel Coconut flavor. Specifically, this is the only flavor that uses coconut in the name, despite all three flavors having coconut milk. It’s also the only flavor to specify the number of grams of protein, which also could be made consistent.

All in all, we’re fans of the concept and the approach that Chia-Star has taken with this innovative new line of beverages. While it’s slightly rough around the edges in some places, it’s still quite enjoyable and puts Chia-Star in a nice position in an emerging category.