Austin, Tex. based Cuvee Coffee, one of the first companies to create Nitro cold brew in ready-to-drink form, has continued to push forward when it comes to launching creative and innovative offerings. This product, which is an horchata flavored coffee, continues that trend. 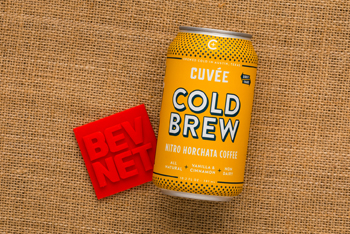 If you're like us,  you probably haven't thought about combining horchata with coffee. However, they are somewhat complementary, with the bold flavor of nitro cold brew pairing nicely with the sweet and spiced flavor of horchata. And thanks to the rich texture that the infusion of nitrogen t provides, the product tastes like it has milk even though it doesn't.

Honestly, the only thing that is missing is the flavor of nuts or rice, one of which is found in any traditional horchata out there. In its place you'll find a heftier dose of cinnamon, which  fortunately works pretty well with the flavor of the cold brew.

From our perspective, this product would serve as a pretty nice alternative to a traditional latte or vanilla flavored coffee. It feels like a mainstream oriented product with a slightly exotic edge to it -- and we think they've executed it well.

Nutritionally, each 12 oz. can has 80 calories and 19 grams of sugar. The sugar content might raise a few eyebrows, especially in comparison to other cold brew coffees out there (which often don’t even have any sugar). But again, if we’re comparing it against mainstream ready to drink coffee, it certainly is in the right ballpark.

Visually, we've always been fans of the look and feel of Cuvee Coffee’s ready-to-drink packaging.  With a vibrant gold background, this product is no exception. Plus, they've arranged the text in such a way that it's intuitive and easy to quickly grasp what's inside the can.

Overall, this is definitely a line extension that will likely serve in an incremental way for Cuvee.  It’s unlikely to be a consumer’s starting point with the brand or one that helps the company reach new consumers. Instead, it’s a fun and unique offering that will give their customer base some variety and another way to engage with the brand. And for those who try it, we think there’s a good chance that this will become a staple flavor for them.