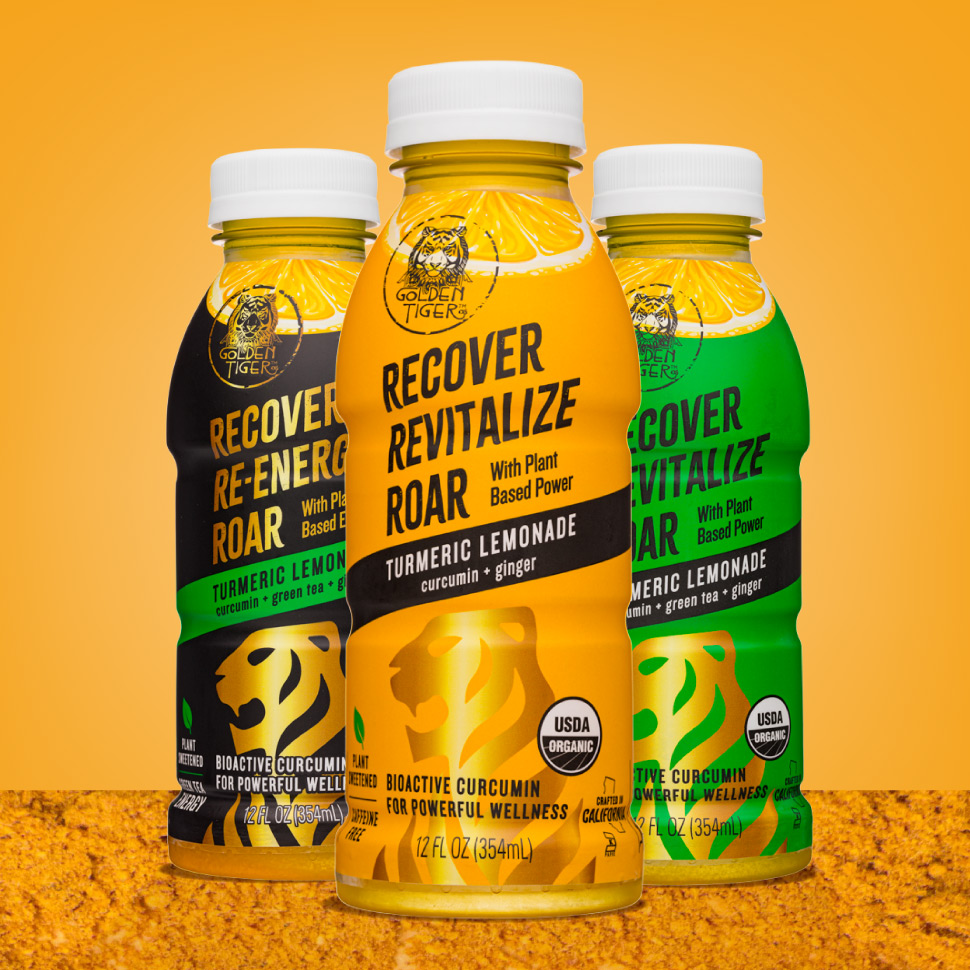 After launching several years ago, Golden Tiger is back with a new formulation and an updated package design for its line of turmeric-based juice drinks. The three-SKU  line, which features 100 mg of bioactive curcumin per bottle, is also now USDA Organic certified.

The lineup includes two turmeric lemonades -- one with green tea and one without -- and one energy SKU. Compared with the previous iterations that we tasted in 2019, the two lemonades are lower in both sugar (4 grams) and calories (20)  per bottle. The energy drink, on the other hand, has 18 grams of sugar and 80 calories, which is more in line with the original.

For Golden Tiger, the core component of the product is the circumin. Each drink contains a quantity of turmeric (100 mg) that’s higher than what you’ll typically find in beverages, but furthermore the brand utilizes a proprietary process to heat the curcumin to a specific temperature which, according to the company, allows the curcumin to reach its maximum bioavailability.

When it comes to flavor, Golden Tiger has done a nice job with all three of these products. The two lemonades are sweetened with a blend of agave and stevia, but the stevia is almost completely masked. There are notes of lemon, lime, ginger and turmeric in both flavors, while the Green Tea Lemonade also has a slight grassy note. Both finish with a mild but lingering spice from the ginger and turmeric, although we would not call either of these drinks spicy.

Since the core flavor of turmeric and ginger is really what you’ll taste throughout, the differences between the two lemonades is pretty nuanced. That being said, we’re not totally sure that calling them lemonades is completely accurate since the lemon and lime flavors are definitely more in the background.  Regardless, both are enjoyable to drink and we think that consumers who like ginger and turmeric will be pleased.

Moving on to the Energy variety, this product, which has more agave and no stevia, appears to be a sweeter version of Green Tea Turmeric Lemonade. The sweeter profile will probably appeal to some, but we prefer the lighter and more subtle flavor of the lemonades.  In addition, we were somewhat confused by the word Energy and expected the product to have added caffeine; the brand does not disclose how much caffeine is in the green tea, or state any other added functional benefit.

On the package, we like the move to a fully wrapped, more sleek looking 12 ounce bottle. Each SKU has a different  background color, with black for Energy, gold for Turmeric Lemonade, and green for Green Tea Turmeric Lemonade.

While the look of the label feels more modern and functional than the previous version, we think Golden Tiger still needs to address a few things that we cited in our first review.

First and foremost, it’s really hard to tell the difference between the three SKUs as they all say Turmeric Lemonade across the middle of the label. We feel strongly that each SKU needs a name and that this should be one of the most prominent elements on the label. Furthermore, we think that the Golden Tiger logo needs to stand out more. The most dominant element on the label is the tagline “Recover, Revitalize, Roar.”. While this is fine marketing wise, it shouldn’t be the main element.

Lastly, we feel that Golden Tiger still needs to work on showing that its approach to circumin/turmeric as a functional ingredient is superior to the competition. There’s a large section of text on the back that speaks to the story of the ingredient and its benefits, but we think that most consumers know that these are healthy ingredients -- there’s no need to sell them on that. Instead, we think they should be more direct about their process and why it results in something that’s more bioactive and thus more efficacious to the end user.

Still, we do feel that this latest branding effort is a step in the right direction. We like the active, angled style to the text and the silhouette that’s at the bottom as well as the prime placement of the USDA Organic logo. The bottle definitely has the vibe of a sports or recovery drink, which is exactly where we think it needs to be.

Overall, Golden Tiger’s latest effort shows a product line that feels like it’s on the right track. There’s definitely still some work to be done, but this is much improved over the first iteration.