1051 is a USDA Organic certified electrolyte and mineral drink that is low in both calories and sugar. 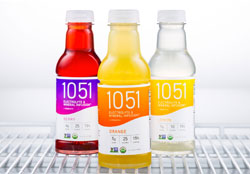 Named after the address of the founding company’s cafe, located in Encinitas, Calif., the product presents itself as a somewhat technical, but not overly serious-looking product. It comes packaged in a stock 16 oz. PET bottle and features a label that has, thanks in part to the name, messaging that’s feels numbers focused. From there, they’ve added callouts for the flavor name, the “Electrolyte & Mineral Infusion” tag line, and the product’s sugar, calorie, and magnesium, content. While the first two of these make sense, the callout for magnesium is a bit of a head scratcher, especially since it’s listed in percentage form with a label that says “DV OF Mg.” We’re pretty sure that this isn’t something that most consumers will recognize.

That said, we feel like a softer and more approach to the appearance would probably be beneficial. It has a pretty generic feeling that risks seeming like a “me-too” version of a sports drink or, even worse, it being something that the consumer simply can’t figure out. Working on the visual appeal of the product and figuring out a less technical way to describe it would be helpful.

Inside the bottle, the company has paired artesian well water, juice concentrates (ranging from 9 to 13 percent), ionic sea minerals, stevia, and ascorbic acid. The Orange and Berry varieties, which are both 25 calories, have somewhat similar flavors. They are both mildly sweet and salty, with a touch of sourness to the finish. The use of fruit juice is definitely a plus, but these flavors are still very much in the background. And the stevia lingers too long, which is something that could be improved. As for the lemon flavor, we think they’ve gone a bit too far in sacrificing flavor to get to 1g of sugar and 10 calories (the lowest of the three). There’s a harsh level of sourness that needs improvement.

While there’s definitely some room for improvement with both the package design and the flavor, there’s a bigger question at hand: what is 1051 trying to be? Is it a sports drink? And what’s its point of differentiation? Is it simply that it’s non-GMO and USDA Organic certified? In both cases, we think this needs to be fleshed out a bit more. Simply competing on technical attributes isn’t going to be enough.