Austin, Texas-based HeyDay is an upstart line of cold-brewed coffee drinks that appears to be aiming directly for the mainstream. The product is packaged in a slick looking 12 oz. can and is available in four varieties: Black, Espresso, Chocolate, and Vanilla.

Offering chocolate, vanilla, black, and a dairy-based “coffee and milk” varieties definitely direct from the playbook of most RTD coffee brands (excluding the recent movement of cold brew, that is). In the case of HeyDay, the offerings are also being presented with the calorie conscious consumer in mind, as there are callouts on the front of each flavor, which range from 15-80 calories per can. 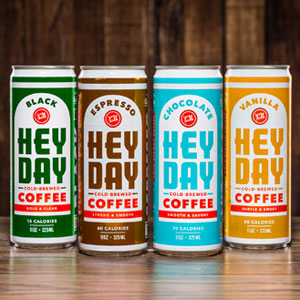 To achieve this, they have one variety that’s unsweetened (Black), one that’s sugar sweetened (Espresso), and two that use a blend of sugar and monk fruit extract (Chocolate and Vanilla). Predictably, we preferred the two varieties that don’t contain monk fruit, although we will say that they’ve done a pretty nice job of keeping any aftertaste at bay.

The underlying coffee flavor is, at least judging by what we taste in the unsweetened and unflavored Black variety, smooth and medium in to the point where it could be consumed straight. This coffee flavor is also quite noticeable in the Espresso variety, which pairs cold-brew, milk, and sugar (7g) and is our favorite of the bunch. The two flavored varieties, and Vanilla, taste more like stereotypical RTD coffee flavors and, unfortunately, need some work on the sweetener blend.

The branding and design of HeyDay arguably its strongest attribute. The product is clean and has a mainstream but slightly hipster look to it. The word “Hey” creates a nice call to action, whether that was an intentional part of the design or not. Its visual alignment is otherwise extremely clean, and it’s sure to catch some eyes at the retail level. For us, the only thing we wish were slightly more intuitive is the difference between the Espresso and Black flavors (one has dairy, the other does not -- and there aren’t any front panel indicators for this).

In the marketplace, we suspect that HeyDay will go head to head against another Austin-based  Brew. High Brew, which has a pretty good head start against this and other upstarts, has, in comparison to HeyDay, a broader product line, a slightly smaller can, and a brand that is well-executed and has equity in the marketplace.

Where does this leave HeyDay? From our perspective, HeyDay really needs some more “wow factor” if the brand is going to be able to carve out its own niche in the ultra-competitive cold-brew category. Slick-looking packaging and formulations that are pretty well-executed are a great starting point, but HeyDay definitely needs to think about further refinements if its goal is to be a player in this category.