Modern Alkeme is a self-described “Clearing Tonic” and is available in a single 8 oz. formulation that is high pressure processed (HPP) and currently has a suggested retail price of $3.99.

On the surface, this appears to be a new take on a cleanse product, with a suggested regimen of two bottles per day for three days along with plenty of water and a healthy diet, followed by a bottle per day for daily maintenance. 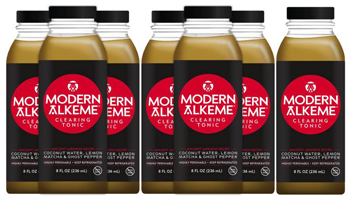 While the ingredients give it the feel of a cleanse beverage, all of this stuff also blends together to create something that’s flavorful. Each bottle has a very modest 35 calories and 9g of sugars, so it was no surprise that it had a relatively light mouthfeel. The key flavors, which they’ve highlighted on the front of the bottle, are the coconut water, lemon, matcha, and ghost pepper (which basically tastes like cayenne). It’s spicy, but still refreshing, with a flavor that tastes like green tea with lemon.

From the marketing and branding end of things, the product, which has celebrity founders Jules Wainstein (a member of Bravo’s Real Housewives of New York) and Chloe Flower (musician and composer), feels rather technical in its appearance and message.  Fortunately, it’s not overly serious in its demeanor and we’d describe the vibe as apothecary rather than pharmaceutical.

Our chief concern for the product is communication: Clearly the initial purchase isn’t going to be for taste (unless the consumer has participated in a demo), but doing something else so that the consumer has confidence that it isn’t going to taste bad would definitely be helpful. The short list of key ingredients is a great starting point, but the consumer still has to connect the dots a bit too much.

All in all, we like the concept and the execution of the initial version of the product. It delivers a unique take on the classic detox function and it does it with a flavor profile that is enjoyable and memorable. From here, the question is really whether or not this can be developed into a brand with a suite of offerings or if this is a functional product that consumers just use when needed. If it’s the former they are after, additional flavors or functions are the logical next step for Modern Alkeme.