On the surface, this sounds a whole lot like what some of the flavored sparkling water brands are doing (Spindrift immediately comes to mind, although this product uses juice concentrates), but there’s one key difference: added caffeine. In all of the flavors, with the exception of the Caffeine Free Apple variety, they’ve added 42mg of caffeine (the exact amount in a can of Diet Coke). But in reality, that’s about the only commonality between this and one of the major diet soda brands. 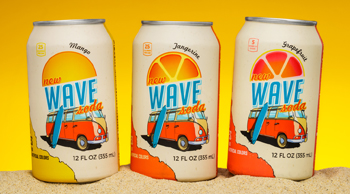 That’s pretty obvious when you take a look at the flavor lineup, which includes Cucumber, Mango, Grapefruit, Blueberry, Tangerine, and Apple. All of the products have 25 calories per can, although the sugar ranges from 2-6g depending on the flavor.

From a taste perspective, Wave Soda definitely drinks more like a sparkling water than a can of soda, be it diet or regular. We’re big fans of the Cucumber and Grapefruit varieties, both of which really shine in the low sugar formulation that is used throughout the line. As for the other flavors, they’ve done a really nice job of creating formulations that are light, balanced, and really refreshing. Really the only flavor that we aren’t fond of is the Apple, which doesn’t really taste like an adult flavor.

Packaging is the first area where Wave Soda struggles. First and foremost, the product has a somewhat sloppy aesthetic, starting with the fact that the word “New” appears to be a part of the logo (we honestly thought it was “New Wave Soda” at first glance). There’s color on top of color, which makes the label hard to read -- it made  the flavor name easy to miss. And we really think that this product needs to be clearer  about its caffeine content as consumers won’t expect it from these flavors. However, the biggest issue is that what they’ve created doesn’t really appeal to the senses or draw you in.

The second place that Wave Soda struggles is with positioning. It’s positioned as a soda with caffeine, but the product is really closer to a flavored sparkling water or even a sparkling juice. Trying to appeal to the health-seeking soda drinker with soda has proven to be difficult (outside of the diet soda category, which is lagging itself) and we think that this puts Wave Soda is a somewhat undesirable position. Restaging it as a more general sparkling beverage would probably help, although we’re honestly not quite sure how the caffeine would work in this situation.

In the end, Wave Soda has, for the most part, come out of the gate with some flavors that are pretty enjoyable. However, we really question the positioning and whether or not it will have Wave set up for success or not.