Pressery Coconut Drinking Vinegar is a line of organic cold-pressed beverages that are made with juice and coconut vinegar.

Pressery, which is a Colorado based company that also produces a line of traditional cold-pressed juices under the same brand, has done a great job of creating something that is authentic but approachable.  While this might be something that’s a requirement for most beverage categories, the concept of drinking vinegar is still somewhat bleeding edge, so we’re quite impressed with what they’ve done with both the product’s branding and taste. 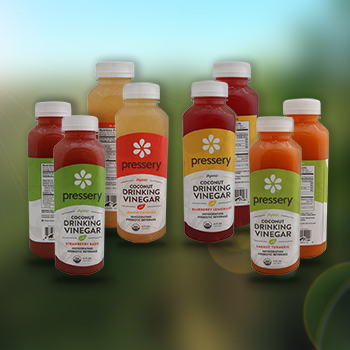 There are six flavors to their product line (note: we tested only four) and they are pretty hard to miss on a cooler shelf. They are packaged in 14 oz.  bottles that have been given vibrant  labels featuring  white on the bottom and an accent color on the top. The label is super easy to read quickly and is polished and clean helping give the product credibility and appeal before you even open the bottle.

Coconut drinking vinegar is definitely a concept that’s going to feel esoteric to most consumers. So the fact that they’ve made it easy to read the flavor and made the color of the liquid appealing to the senses will definitely have to make up the difference. From our perspective, we think they’ve done enough to at least get a consumer to pick it up and try it. For starters, the liquid doesn’t look like vinegar, which is good. And the flavor of these drinks are quite enjoyable as well.

Coconut vinegar, which is made from the fermented sap of a coconut tree, has a mild flavor (at least in comparison to apple cider vinegar) and it makes for a nice complement to the flavors that they’ve added.

In our test, we sampled Carrot Turmeric, Lemon Cayenne, Blueberry Lemonade, and Strawberry Basil. All of the flavors are modest in calories and sugar, ranging from 80 to 100 calories per bottle and 14 to 24 grams of sugars. Here’s a rundown of each:

Ultimately, we feel as though this is a product that’s slightly ahead of the curve in terms of the market being ready for what it’s offering. Still, this is a really well executed product that seems nicely positioned to really take advantage of the drinking vinegar trend as it continues to pick up steam. What Pressery has created so far is really quite impressive and enjoyable.