Review: Runa Gets Its Best Looking Labels Yet

Founded in 2009, Runa has, just like every upstart beverage company that’s selling something unique, been through many label and product variations over the years. That’s exactly what they’ve done again here in Summer 2016. And fortunately, we think it’s their best effort yet. 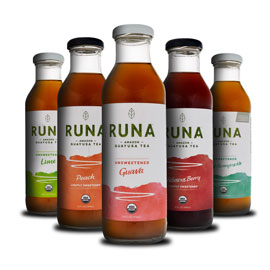 We didn’t necessarily think there was something essentially wrong with their old label. But the new one reflects the evolution of the tea category as well as where guayusa, Runa’s key ingredient, stands within it. Specifically, they are now embracing it more directly, switching from a tagline of “clean energy powered by Guayusa” to a more succinct and direct “guayusa tea.” The result is approachable and simple -- and steers clear of the energy category, which isn’t a bad thing, either.

In addition to being more approachable, the label design is also more aesthetically pleasing, with a nice “craft” vibe. They’ve made the leaf image much smaller and also managed to make it feel like part of the Runa logo; it hasn’t in the past. Furthermore, ditching the fruit imagery, which, in hindsight, made the product appear much more fruit forward than it really was, gives it a more chic look. The move to a paper label and softer colors continues the less-is-more theme. The only thing that we don’t like is the back panel, which has too much text and isn’t likely to be read by anyone prior to purchase.

From a taste perspective, we don’t think anything has changed from the last version to this one. And if it has, it’s pretty minor. The products are all very drinkable and easy to pick up if you’ve ever had a bottle of tea. That said, we still have some favorites, namely the Peach and the Unsweetened Mint Honeysuckle. The Peach is a great adaptation of a classic peach flavored black tea that certainly has mainstream potential. The Mint Honeysuckle is our favorite of the unsweetened flavors. The added flavor is very subtle, rather than mint heavy, and it provides a nice complement to the flavor of the guayusa.

While they’ve downplayed the energy aspect of the product, there’s still natural caffeine in these products. It varies based on flavor, which is slightly confusing, and you’ll find 69 - 90mg of caffeine per bottle. Regardless, it’s a nice added benefit that differentiates it from other products in the tea category.

Overall, this is a great move for Runa and one that should help the brand further its move into mainstream retail.